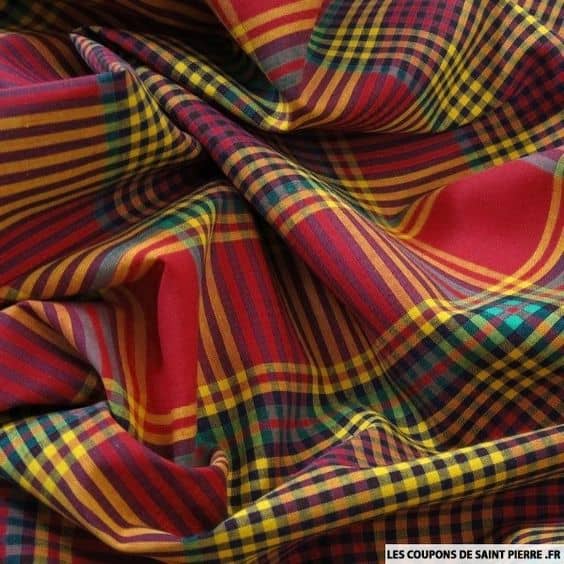 Madras Checks: My all-time favorite, and always in fashion, Madras checks stem from a humble origin with fascinating and quirky twists and turns in their journey.

The Origin of Madras Checks Fabric

Around the 12th century, Madras Checks was a piece of handloom clothing for India’s peasant class in the village called Madraspatnam (Madras now Chennai). The local weavers would extract the soft fibers from the “tip-skin” of native trees to weave 36″ wide square handkerchiefs, which were then block printed with bright colored check patterns.  They were worn as a garment similar to a sarong wrapped around the waist and extending to the ankles, called a lungi.

By the early 13th century, the plaid lungi had traveled to the Middle-East and Africa, where it went from being bottom wear to becoming a headscarf.

It was with the arrival of the European colonizers that the mass production and export of Madras started. Dutch traders arrived in India in the early 1600s to trade in the local calico cloth. Soon the British East Indian Company arrived in India and identified the beautiful Madras Checks fabric. The East Indian company established a trading post in Madras in the mid-17th century. To secure a reliable labor supply, the English East India Company promised a 30-year exemption from duties for Indian weavers in the area. Thus, within a year, nearly 400 families of weavers had settled in Madras.

Initially, it was the British trade that made Madras Checks fabric global. The fabric came to be known by different names in different parts of the world, far east or west. The Madras exported by the British to its other colony – Africa was locally called ‘Injri’ (meaning Real India). Injri became a vital part of the customs of Africa. It was gifted on childbirth or to the family of the deceased soul. 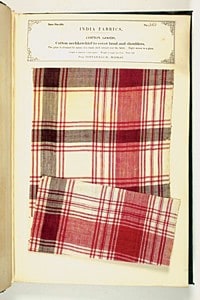 The Authentic Madras has the same pattern on both sides of the cloth; As a matter of fact, authentic Madras is the best example of a genuinely sustainable fabric that was also soft and breathable for the hot and humid climate of the coastal region. The cotton yarns were a short-staple indigenous variety. They were carded by hand and had visible slubs. These slubs or imperfections, which are also an innate beauty of anything handmade, added a lovely hand and texture to the fabric. Soon instead of block printing the cotton, the Indian weavers were dyeing the yarns in vegetable dyes and creating the handwoven madras check patterns.

Due to the resemblance of Madras Checks fabrics with Scottish Tartans, there is a possibility that the look of the Madras Checks fabrics could be influenced by the tartan patterns worn by the Scottish regiments during their occupation in southern India in the 1800s. Although Madras fabrics were dyed with vegetable dyes, therefore they had an earthy look.

The fabric had already become important in North Africa as ‘Injri.’ It became more popular in Africa when it arrived from India in West Africa with the Portuguese traders. In the 17th century, several royals and well-to-do Africans purchased the fabric, For its vibrant colors and uniqueness. Later, the fabric made many west Africans and Portuguese wealthy due to the two-way trade between the Africans and Western traders. Africans would sell the fabric to western traders for other essential goods.  Western traders also sold the cloth in exchange for gold, salt, milk, and other natural resources. Soon the fabric became so vital that it was valued equal to the value of humans, as we can see from what happened during the Trans Atlantic slave trade well into the 19th century.

According to Madrasmusings.com, the  Real Madras Hand Kerchief (RMHK) found its way to London to be auctioned to traders who used it as an item for swap for slaves in West Africa. For many enslaved Africans, these fabrics were also a symbol of suppression.  In the Caribbean, the enslaved women were to cover their hair with Madras to prove that they were inferior to their white owners. Many slave owners put their slaves on fields to perform extraneous physical labor; therefore, they preferred their slaves to wear light madras fabrics.

There is a possibility that Madras Checks arrived in the United States around this time due to the slave trade.

There are many other routes through which Madras found its way into the United States of America. One story goes about the grant made to an American university by a British governor – Elihu Yale, who had amassed a significant fortune during her tenure as a British East India’s governor to Madras in India during the early 18th century.

In 1718, the brand new Collegiate School of New Haven, Connecticut, reached out to several prominent British governors for financial support. Elihu Yale decided to donate money, books, and beautiful madras checks to the college. Her grant was too substantial for the college that later the college rechristened after Yale as the now famous ‘Yale University.’

In 1919, an article was published by the New York Times on the mass demand and consequent shortage of Madras fabrics in the US as every affluent American who was traveling to the Bahamas for vacationing was choosing to wear authentic Madras checks as a style statement and status symbol. By this time, madras had become a preppy fashion statement in the US.

However, after a corporate scandal of 1958, this fabric rose to its highest glory in the fashion world. The story goes that William Jacobson, a leading textile importer, traveled to Bombay to trade with Captain C.P. Nair, exporter of madras. William  Jacobson was fascinated by the gorgeous plaid in vegetable colors with a strong smell of vegetables and oil. He struck a dollar a yard deal with Nair, who tried to warn Jacobson of the possible color bleeding due to the harsh American way of washing the clothes in a washing machine with strong chemical detergents. Jacobson ignored the advice and sold 10,000 yards to Brooks Brothers, who launched beautiful madras fabric clothing for men and women. The Madras collection was available at their stores in Pan America. They were soon flooded with complaints of bleeding fabrics.

As a masterstroke of marketing genius, a Madison Avenue advertising giant David Ogilvy coined the phrase “guaranteed to bleed” and used this bleeding of the fabric as a selling point rather than a defect. A 1966 catalog advertisement stated:

Authentic Indian Madras is entirely handwoven from yarns dyed with native vegetable colorings. Home-spun by native weavers, no two plaids are the same. When washed with mild soap in warm water, they are guaranteed to bleed and blend into distinctively muted and subdued colorings. So smart!

It is fascinating to see a piece of fabric with such a humble origin become a symbol of status and affluence in different parts of the world many centuries later. Over many years, various global fashion brands like Ralph Lauren, Pero, Gucci etc have used Madras checks to design their collection. Most recently Resort 2019 collection of Hermes are some examples. 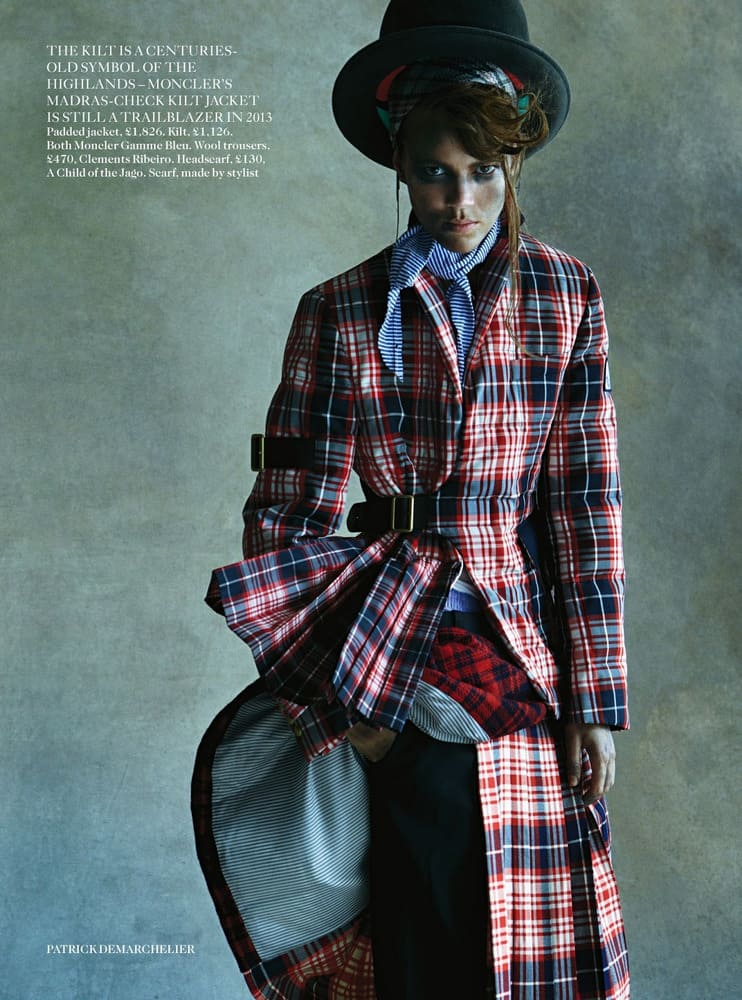 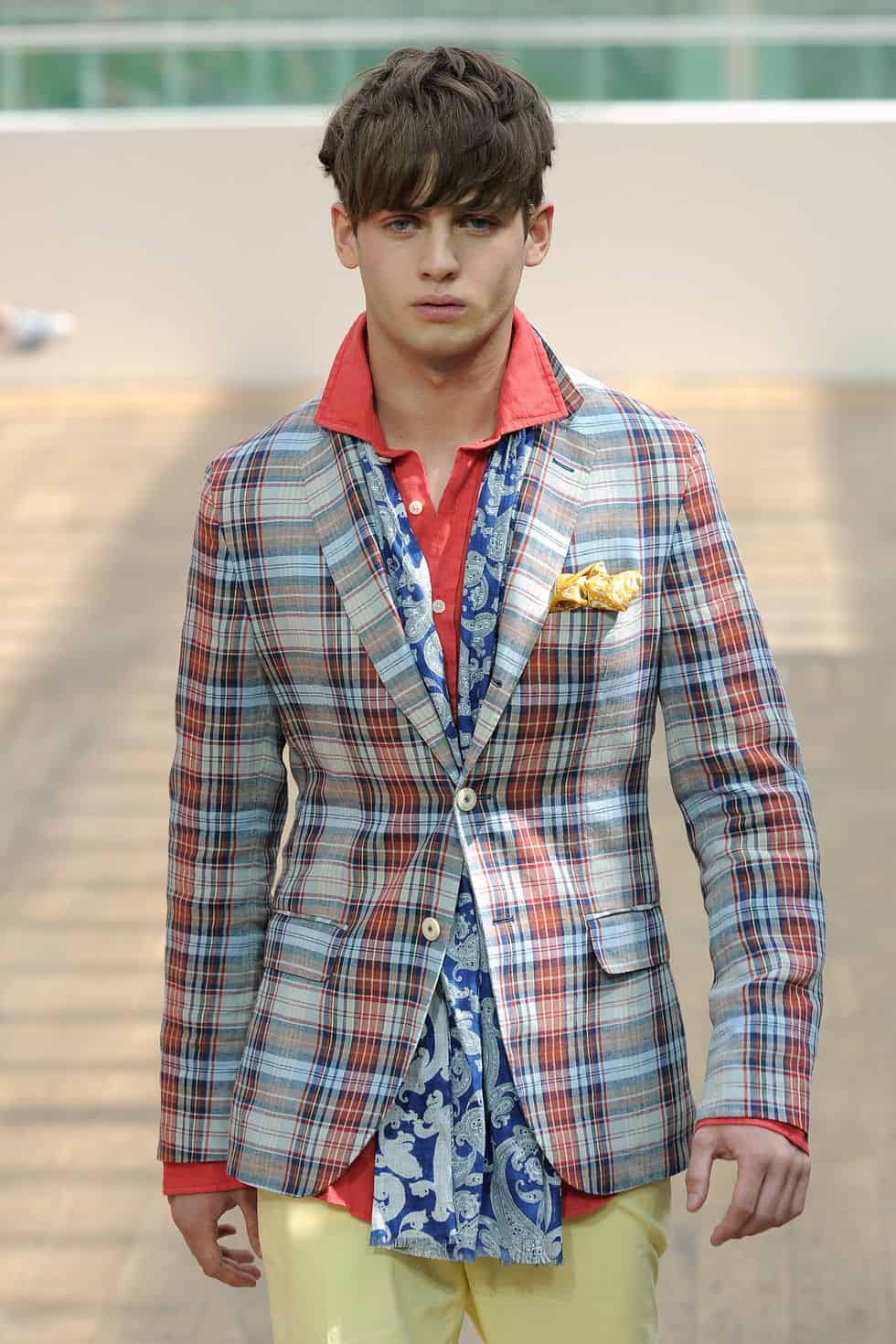