Crochet: My grandmother had a straw box that contained mostly white hanks of thread and red beads. She would take this box out when she wasn’t busy, and magically little doilies with a bead edging would emerge from her fingers. These doilies were used to cover jugs of water and glasses.  I didn’t know it then, but she was crocheting these. Her creations are lost now, but I saw similar ones in a tiny shop in the mountains and immediately bought a few.

END_OF_DOCUMENT_TOKEN_TO_BE_REPLACED

Threads of Life, We’ve all grown up thinking of sewing and embroidery as women’s work: another unpaid and thankless chore.  Darning socks, sewing on buttons, embroidering a child’s dress with a  motif.  But occasionally, we read something that gives us pause and allows us to look at our preconceived notions afresh.  I was lucky to spot Threads of Life: A history of the world through the Eye of a Needle at my local bookstore. END_OF_DOCUMENT_TOKEN_TO_BE_REPLACED 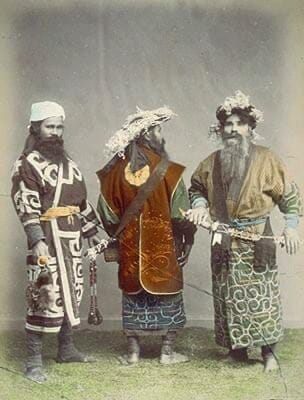 Ainu: We who love textiles know what it is to revere an exceptional piece of weaving or embroidery.  But there is a community where this is literally practiced. And that is by the Ainu.

The Ainu have lived on the island of Hokkaido for millennia, populating a culture distinct from the Japanese. Following a Hunter-gatherer lifestyle, they, like most communities that live off the land, revered all things natural. This reverence interestingly extended to tools and clothes, the minutiae of daily life.  One fascinating aspect of their culture is the reverence of bears, which are seen as gods.  The Ainu would often collect bear cubs and bring them up in their homes, exactly as they brought up children.  Eventually, these bears were sacrificed in a ritualistic ceremony,  with their flesh and fur highly valued as divine.  END_OF_DOCUMENT_TOKEN_TO_BE_REPLACED

Smocking: Those of us who grew up in the 1960s and the decades before then have all worn gingham dresses, very often with smocking. I know that I associate smocking exclusively with dresses for little girls.  But that’s not how the craft started.  In a reversal of timelines from most forms of embroidery, which have been the province of the elite, smocking began as a means to render peasant clothing practical.  And this is what makes it unique among all the forms of embroidery.

END_OF_DOCUMENT_TOKEN_TO_BE_REPLACED

In 2019 we did a lot of research and development in hand knitting, knotting, smocking, and bead-making techniques. We worked with a group of women artisans in the villages of Western Uttar Pradesh in India. Before making the trip to these villages and meeting these women, I was under the impression that these techniques are almost similar to each other and created similar looks. However, once we worked with these masters, we learned about the nuances of different techniques and various design possibilities associated with them. Together with the artisans, we co-created beautiful and chic panels. END_OF_DOCUMENT_TOKEN_TO_BE_REPLACED