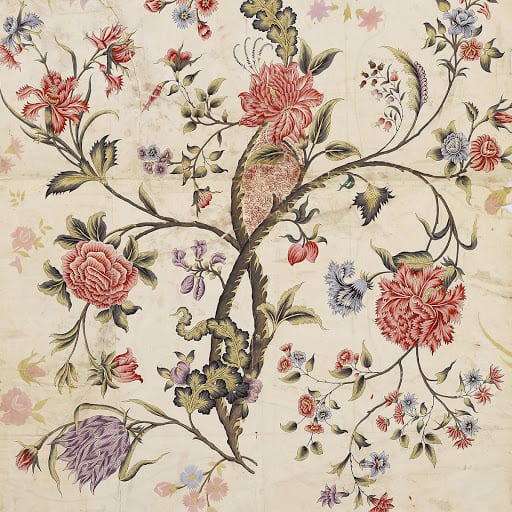 25 Aug The Beautiful Indienne, A Textile Story of Switzerland

The Beautiful Indienne, A Textile Story of Switzerland

I discussed my recent textile-related reads with a friend when she mentioned the book ‘Indiennes – Material For A Thousand Stories“. The exhibition at the Landesmuseum Zürich published this book in conjugation with their presentation.

The name ‘Indienne’ made me curious as I have not heard of it before in relation to the calico textiles that were traded between India and Europe. I grabbed my copy right away and just finished reading it. The book examines what happened next to the beautifully printed and painted cotton story after they left the Indian shores, arrived in Europe and created a veritable storm of buying enthusiasm in Europe. 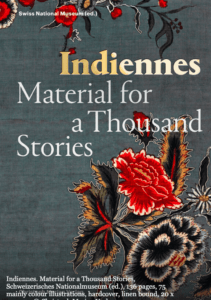 Indiennes are printed and painted cotton fabrics that came from India to Europe in the 16th century and were soon imitated by French and Swiss Companies. In the 17th and 18th centuries, an unprecedented enthusiasm for these colorful fabrics gripped all of Europe, influencing society, business and fashion for almost two centuries. In knowledgeably written texts and rich images, fascinating stories are told: of how Swiss companies helped to shape the profitable indienne industry; of how the firm Volkart brothers built up a trade empire in 19th century India, which simultaneously drew Basel missionaries to the subcontinent; and of how, in the 20th century, a Swiss photographer conveyed Gandhi’s struggle for independence to the world, a struggle whole protagonist was a simple cotton fabric Khadi ..

Indienne (that which comes from Eastern India) was a type of printed or painted textile manufactured in Europe between the 17th and the 19th centuries. These textiles resembled the textiles initially made in India (hence the name)

Indiennes is also a story of the global trade success of a small European country, landlocked on all four sides. Despite having neither direct access to any of the significant seaports nor any colonies, let alone any ‘East India Company’ of its own became a hub of the indienne textile industry-leading Switzerland to global trade, industrial espionage, and wealth creation. Swiss companies got embedded in the ‘white gold’ trade to the extent that in the 1780s, the Swiss Cotton textile trade employed over 20% of Geneva’s population.

Chintz and Indienne are the first examples of globalization.

The European ships left India with the textiles and the technical expertise to produce colorfast and colorful fabrics. Due to the transfer of knowledge and technology between India and Europe in the late 17th century. European artisans started the art of calico printing, also known as indienne. This learning process was based, on the one hand, on available knowledge about European methods of printing and coloring. On the other hand, the challenge was to adapt techniques from India, where artisans had produced skilfully printed cotton textiles for centuries.

Ever since these painted and printed cotton fabrics arrived from India, they had become synonymous with a newly refined taste of the European nobility. Therefore the local textile entrepreneurs applied all of their business acumens to capture this market with local manufacturing. They acquired the necessary practical knowledge by procuring skilled workers from abroad. Armenian specialist workers’ expertise was in particular demand, who came from Asia under their own steam and set up pioneering indienne workshops in Marseille, Geneva, Livorno, and Amsterdam. Additionally, the Swiss Entrepreneurs set up efficient sales & marketing teams to timely collect the buyers’ feedback. They were enabling the development of updated designs on short notice.

How did Switzerland become the Hub of Indiennes Manufacturing

The first Indienne factories appeared in major port cities like London, Amsterdam, and Marseille. These were vital transshipment points to the European trade with India. However, the history of the Indiennes represents migrant’s contribution to the success story of a small country such as Switzerland.

France was the biggest importer of Chintz to the extent that these cotton started appearing as a threat to the local silk and linen weaving industry. Consequently, King Louis XIV of France gave in to the pressure from the silk and linen manufacturers from France to ban the importing, manufacturing, and wearing of printed cotton cloth in France. The French textile entrepreneurs fled France and set up factories in Switzerland on the French-Swiss border. The Indienne production was a welcome source of new jobs by Switzerland that brought people into paid employment. Therefore, Switzerland used this predicament to its benefit. The local authorities supported this new economic sector by offering cheap loans or privileges. Also, despite the ban imposed in France, the french still purchased the desired clothes regardless. Therefore this turned out to be a win-win situation for the newly immigrated Swiss Entrepreneurs.

After 73 odd years, the ban in France was over. France had to buy back technical expertise from Switzerland at a very high price. Another big financial win for Swiss.

The introduction of intermediary trade

Once the European merchants were able to establish trade routes with the rest of the world. They began to buy raw materials in the hinterlands of India, East Asia, and Africa to sell to large scale customers in the Western countries. They were thus integrating the world into a global trading network. This form of trade came to be known as intermediary trade.

People who had previously worked as artisans or subsistence farmers independently from the rest of the world became dependent on the price fluctuations of the global market. A new term emerged: ‘International Division of Labor’. Swiss merchants sought their fortune overseas thanks to intermediary trade and the International Division of Labor. The swiss firm Volkart was the first to form its branch office in India for intermediary trading. They developed a cordial relationship with the manufacturers and suppliers of cotton from the hinterlands of India. They also set up Swiss missionaries to further increase their hold on the raw cotton trading in India. These branch offices of Swiss companies in India became a significant source of intermediary cotton trade for Switzerland.

The story shows that from the start, global trade consists of more than just producers and buyers. Powerful intermediaries were always involved.

The trading firm Volkart Brothers addressed the preferences of local consumers and based label designs on Asia’s preferred colors, patterns and designs

At first Volkart Brothers was involved in a diverse range of trading and bartering operations. The trading firm imported European consumer goods, such as paper, soap, and matches, to India and exported commodities, predominantly cotton, to Europe. 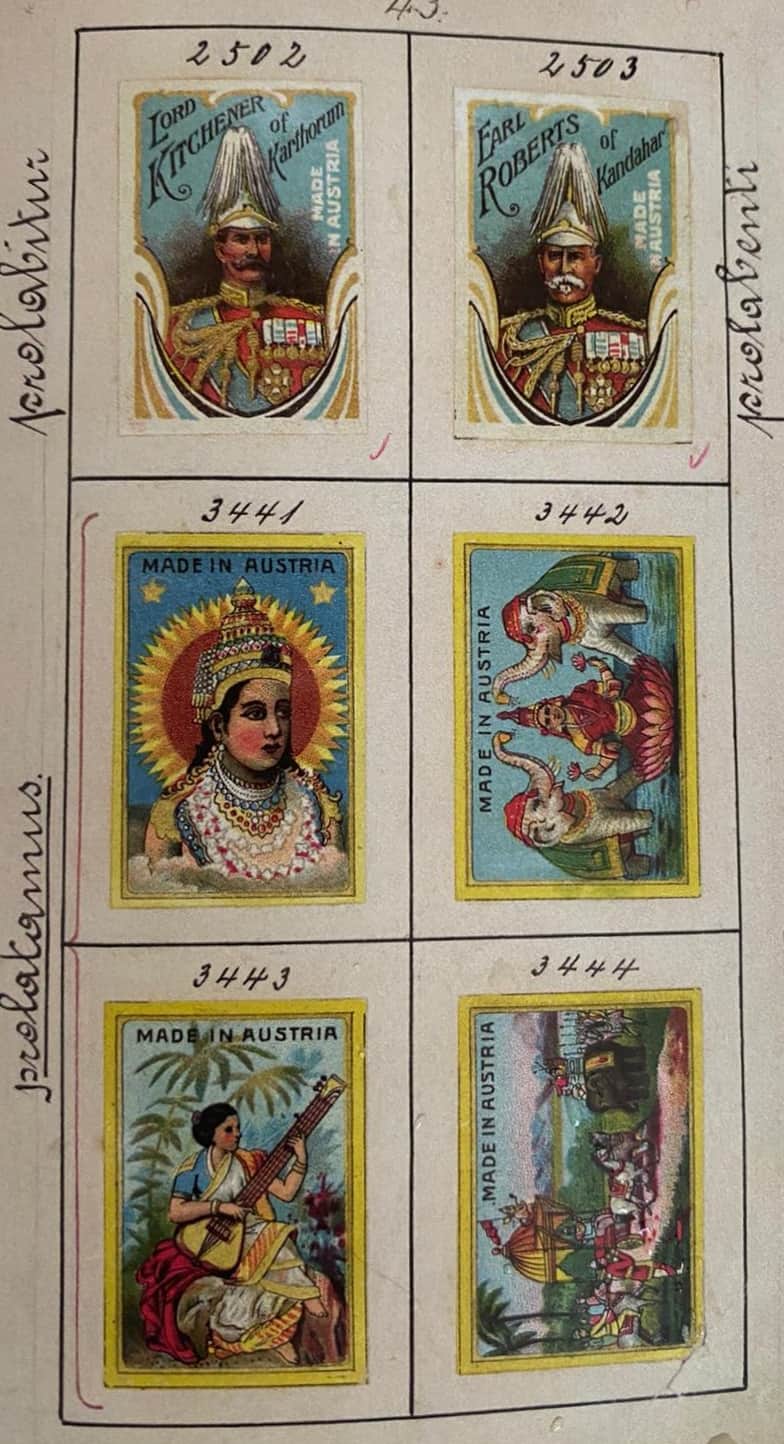 Sharing some Additional Reads. Hope you enjoyed reading! Thanks, Nidhi

HOW DO YOU SOURCE SUSTAINABLE COTTON

THE STORY OF INDIAN KALAMKARI