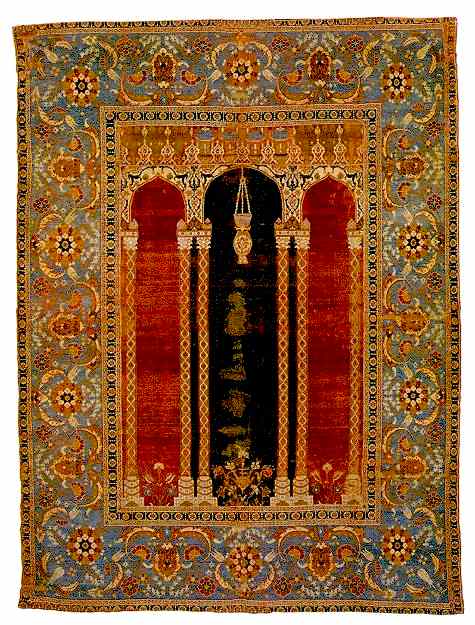 Imagine a home, an airport, or a hotel with just bare floors room after room, no matter how lovely that floor might be.  Through the ages, carpets have warmed our homes literally and visually, added to the decor, and provided insulation. In many cultures, they are regarded with enormous esteem, part of prayer ceremonies and religious places.  The motifs are replete with history and cultural references, common across geographies and nations.

The history of carpets worldwide is an enormous topic, so it’s best to tackle it country wise. Today I’m going to look at the main traditions in the Indian subcontinent.

The history of carpet weaving in Kashmir goes back to the 15th century when the Sufi mystic Syed Ali Hamdani brought Persian skills and craft knowledge to the valley via the Silk Route.  He arrived at the invitation of the emperor Zain ul Abadin, along with several artisans skilled in weaving.  Over time, Persian motifs were amalgamated with indigenous flora/fauna to give the carpets a particularly Indian look.  The colors, too, were uniquely Indian because of the practice of using dyed yarns.

The Kashmir carpet industry was given a massive fillip by the advent of the Mughals, starting with Akbar and then Jahangir, who both patronized the industry. Their patronage gave several new motifs, such as the mythical fauna and hunting scenes under Akbar, and then natural flora and vines under Jahangir.

As time went on, carpets became increasingly complex, with lattices and millefleur patterns.  Persian inspirations led to the Charbagh and the central medallion design layouts, which are now considered representative of Kashmir carpets.

THE STORY OF CASHMERE OR KASHMIR SHAWLS

After the fall of the Mughals, the industry fell into disarray, to be revived in the 18th century under Maharaja Ranbir Singh.  When Kashmir carpets were displayed at the Crystal Palace exhibition in London, they caught the imagination of the European public, helping to revive the industry.

Miraculously,  the process of weaving carpets remains unchanged in Kashmir for over 500 years. The ateliers are known locally as Karkhanas, and knowledge is passed down from father to son through generations, using the master/apprentice system.

The Kashmir carpet is intricately hand-knotted from vegetable-dyed wool/silk and is woven on a vertical loom. The making  can take up to two years and follows the following method:

Carpets can be wool, wool/silk, or silk alone, which have a sheen appreciated by many.  Interestingly, Kashmir carpets continue to be named after Persian place names.

As mentioned above, the Mughals gave extensive patronage to the carpet industry, and Agra, the imperial capital, was an early center set up by Akbar in the 16th century.  As in Kashmir, Persian weavers were invited to set up karkhanas and educate local weavers.  Agra carpets soon rivaled those of Kashmir, reaching their zenith under Shah Jahan.  They were stored in a royal carpet house or farrashkhana, where Akbar spent much time admiring his carpets.

In an interesting twist, prisoners in Agra jail were taught carpet weaving, initially to keep them out of fomenting trouble.  Agra jail carpets eventually became a byword for quality, often using Pashmina for the softest carpets.

The coming of the East India Company set up a profitable trade in Agra jail carpets to Europe, where they were widely popular. Queen Victoria received an Agra jail carpet as a gift when she became Empress of India.

Agra jail carpets proved so popular that similar centers were set up in  Amritsar, Lahore, Jaipur, and Gwalior. 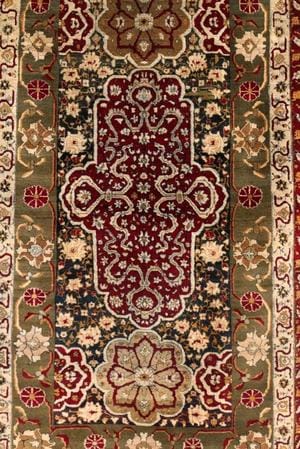 The carpet industry still flourishes in Agra, where the Karkhana system, similar to Kashmir, is followed.  These carpets use the asymmetrical Persian knotting system and classical Persian motifs, and the talim system of weaving is followed. Most rugs nowadays are wool or silk on a cotton foundation.

In my next article, I will speak of the world’s most famous carpet tradition: the famed Persian carpets.