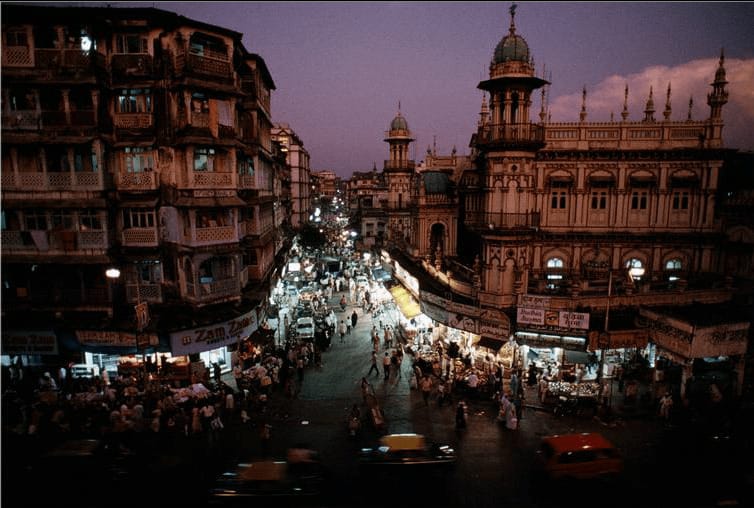 Indian Textile Trade History: In this article, we will examine the link between Mumbai’s current urban landscape with its history in the cotton trade of India.

Mumbai, an urban city of luxurious skyscrapers and destitute slums, was built 400 years ago on seven islands. Before the European Influence, a community of fishers inhabited these seven islands. The Portuguese were the first to arrive here from Europe and strengthen their influence on the archipelago from 1534 onwards. Bombay’s fate changed when it entered the rule of British East India Company (EIC) after it was given as a dowry from Portugal to Charles II of England and consecutively came under the influence of EIC.

When Bombay came under British influence, the British were already trading in cotton, silk, and other commodities on the Indian subcontinent. And were already aware of the pros and cons of doing business in India. The British found these seven islands strategically essential to conduct trade between the hinterlands of India and the rest of the world. After acquiring the seven islands, The British first converted the Portuguese manor house into what is now known as Bombay Fort. Then they moved their headquarters from Surat to Bombay. Thus the foundation for an urban Bombay was laid.

The British’s intention to use Bombay as the center of trade between the hinterlands of India and the rest of the world could be successfully fulfilled only with the trust and close cooperation of the Indian tradespeople. Therefore the British convinced smart tradespeople from the hinterland to join them in Bombay, a place where the British guaranteed a safe life, religious freedom, and business opportunities. Bombay became a land of common commercial interest between the British and Indian tradesmen.

The raw cotton was grown in the hinterlands of India.  And it was always a challenge for the British to coordinate the work happening in the hinterlands. The textile merchants of Bombay resolved this requirement of the British. However, there too, the market was partly occupied by a long-staple variety of cotton grown in and exported from America. As the long-staple variety of cotton was more suitable for machine/mill based weaving of cotton fabric. Soon in 1861, with the start of the American Civil War, the British turned to India to fulfill their entire demand for raw cotton as American cotton supply totally stopped. The textile merchants of Bombay earned fortunes in fulfilling this demand.

These bales of raw cotton were converted into finished fabrics in textile mills in Lancaster and were imported to many other countries including India. These cheap mills made imports threatened traditional handmade textile manufacturing throughout India’s hinterlands. However, he Bombay textile merchants were flourishing. They used the revenue generated from raw cotton trading in establishing an independent textile industry in Bombay. These factories specialized in exporting cotton yarn to the west and weaving cotton fabric for the local market. In 1854, a Parsi merchant constructed the first textile industry in Bombay. These industries soon grew to take on global dimensions. By 1860, there were four cotton factories in Bombay.

This new wealth generated by Indian merchants led to the investment in infrastructure development, starting from building a network of railway lines connecting Bombay to cotton regions. The profits and employment rose to great heights in the Bombay textile industry. In 1875 Bombay employed 13750 workers, and by 1895 the number already increased to 76,000.

This cotton boom in Bombay led to a massive wave of immigration. The cotton factories employed many newcomers as cheap laborers. This sudden increase in population led to housing shortages, which led the factory owners to invest in building workers’ settlements, so-called chawls. They were 2 or 3 storeyed buildings built around a common courtyard that connected single rooms to shared toilets.

A place called Girangaon emerged in Bombay. It was a factory town filled with chawls and cotton factories.  At the start of the 20th century, almost 130 cotton factories were operating in Bombay. The time when cotton was already beginning to compete with cheap synthetic fabrics from Japan and China. And the workers had formed unions and started protesting for their working conditions. All of these combined factors lead to the downfall of the Bombay cotton industry. It followed the conversion of many factories into tall and swanky housing facilities in the same neighborhoods as the chawls seen in today’s Mumbai.

Gandhi,  with his humble spinning wheel and cotton loincloth, drove a spirit of undaunted patriotism in Indians. He transformed the fabric into the symbol of a self-sustaining India, By encouraging the masses to refuse British-made clothing and to spin their own yarn and wear khadi. Gandhi communicated to the population to be proud of their country and heritage.

Hope you enjoyed reading it!