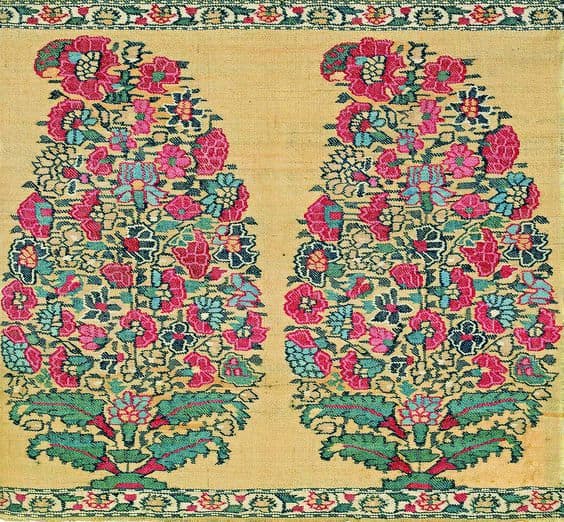 16 Aug The Story of Cashmere or Kashmir Shawls

The Story of the Kashmir Shawl

I have a very early memory of a mouse-coloured shawl my mother had which could go through a large man’s ring. I loved doing this so much the shawl was damaged, much to my mother’s dismay. I know today that this was the shahtoosh, made from the hair of the Chiru antelope, now rightly banned because the Chiru is endangered.

Fortunately, all other Kashmir shawls have more benign origins and we can continue reading about them, marvel at their workmanship, and snuggle into their luxurious warmth if we are lucky enough to own one. In India, shawls are often treated as part of a coming of age ceremony, so a girl getting married might get her first shawl as a present from her parentsThe history of the Kashmir shawl goes back at least 500 years with most scholars agreed that Sheikh Ali Hamdani and Badshah Zain ul Abidin brought it to the valley from Persia in the 14th century. But it came into its own under the Mughal king Akbar in the 16th century. We are told that Akbar enjoyed wearing two pashmina shawls together by Abul Fazl in the Ain-i-Akbari. Shawl ateliers flourished in his reign because of the personal interest he took in design and color. A shawl was an important part of the khilat ceremony under the Mughals, which was a ceremonial presenting of robes by the Emperor to a favored courtier

Kashmir shawls can be divided under two main heads, though there are subtle variations even under the same head:

Pashmina refers to a variant of spun cashmere, the animal-hair fibre forming the undercoat of the Changthangi goat. The word pashm means “wool” in Persian, but in Kashmir, pashm referred to the raw unspun wool of domesticated Changthangi goats, found in the high reaches of the Ladakhi plateau.

The Changthangi goat sheds its winter coat every spring. This is collected by the Ladakhi people called Changpa by combing the goat. and sent to Kashmir.

In the 16th century, European travelers lured with the fabled wealth of the Mughals, started traveling to India in large numbers. Many carried back Kashmir shawls as gifts for their people back home. This naturally increased with the formation of the East India Companies by England, France and Portugal in the 18th century. Eventually, Empress Josephine of France set the trend for wearing Kashmir shawls in Europe. She owned at least 400 shawls and was widely copied by the French court and then the rest of Europe. Queen Victoria did something similar in England. Many portraits exist of women with their Kashmir shawls, showing how pervasive this trend was.

Kashmir Shawl to Paisley In Scotland 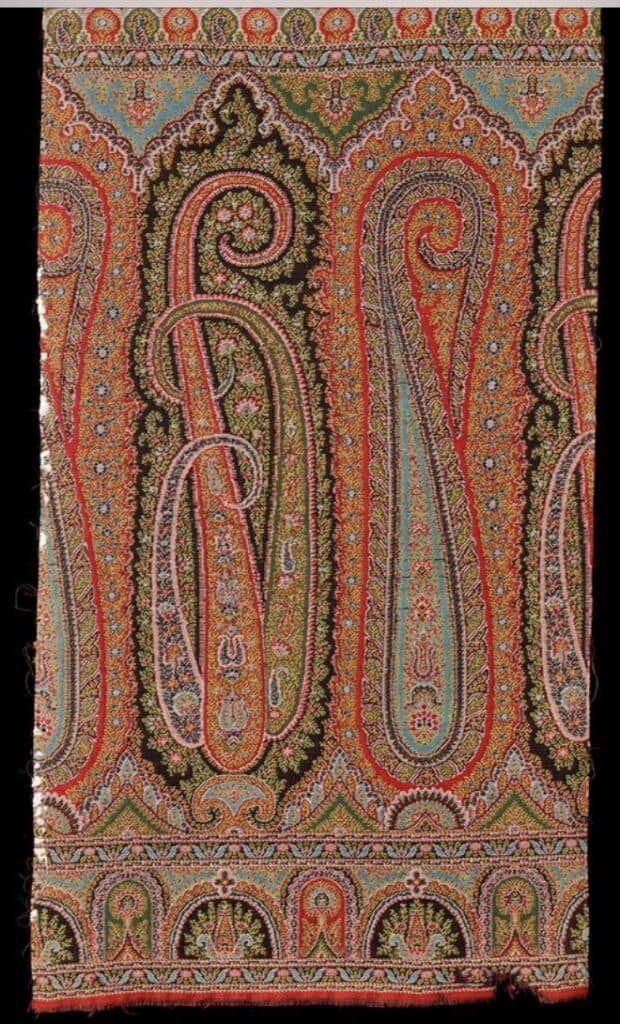 Naturally enterprising people in France and England decided to set up local shawl factories, and Paisley in Scotland and Norwich in England emerged at the centre of this industry. These shawls were not woven using the time-consuming Kani method but were woven on jacquard looms. They were produced with speed and were consequently much cheaper than the original Kashmir shawls. While they are charming, they cannot equal the real thing.

Interestingly, in cross-cultural pollination, the word Paisley came to refer to the buteh of the Kashmir shawl. It continues to be used widely in this context by designers even today.

I can’t speak of the Kashmir shawl without speaking of the most famous shawl of all time. The Srinagar map shawl which shows the entire map of the city in its body.

This is an Amli shawl, which means that it’s embroidered on one side on top of a Kani woven pashmina. 30 years in the making, it was made in the late 1800s.

The shawl is one of a very small number of embroideries that shows the entire city of Srinagar. It was never meant to be worn but was intended as a presentation piece. It is now in the V&A, and though its provenance is unclear, it may have been commissioned by Maharaja Ranbir Singh of Kashmir to present to the Prince of Wales when he visited India in 1875.

Kashmir shawls are just as important today as they have been historically, not just in India but internationally. Though many current examples are poor quality because of rampant commercialization , there is interesting revivalism happening to keep this craft going in the foreseeable future.