21 Aug The Story of Indian Calico that changed the world

The Trade History of Indian Kalamkari

Gradually, the Golconda Sultanate of Hyderabad, and later the Mughals of the Coromandel coast, set up ateliers to create Kalamkari. Under their active patronage, the art flourished to the extent that the practitioners began being called ‘Qalamkars’ or the crafters of fabric art using pens.

When the British arrived in the area in the late 17th/18th century, they found the craft so appealing that it became the premier trade textile, under the name ‘Chintz’ from the Indian word cheent or spotted. Chintz quickly became a rage in England and France because it allowed ordinary people to wear colorful and richly patterned fabrics without paying the price of silk. High profile tastemakers such as Madame de Pompadour in France adopted it for dress and furnishing.

The Palampore from palangposh the Indian word for bedcover was kalamkari used as bedcovers or wall hangings, often with a central tree motif.

Bullion was sent to India to trade for chintz. The chintz were then shipped to Indonesia, where chintz would be traded for spices. These spices and remaining chintz were then sold to other countries for bullion, This led to three-way trading trips. Eventually, this made the East India Company so powerful that they superseded the Mughals and effectively became the rulers of India.

The trade in chintz was such a threat to local weavers in England and France that an Act of Parliament in 1701, known as Calico Acts, banned the use of chintz coming from India.

The Origin of European Chintz

Naturally, Europeans attempted to imitate its vibrant dyes and designs, and this quest sparked the mechanical and business innovations that ushered in the Industrial Revolution, with its far-reaching economic and societal impacts.

An interesting design development is linked to chintz. In France, the entire genre of printed textiles called Toile de Juoy was heavily influenced by chintz and in 1760 the factory Oberkampf was set up to print single color toile for furnishing.

The toile coming out of France continue to be wildly popular as furnishings, with few now remembering that kalamkari was the inspiration. 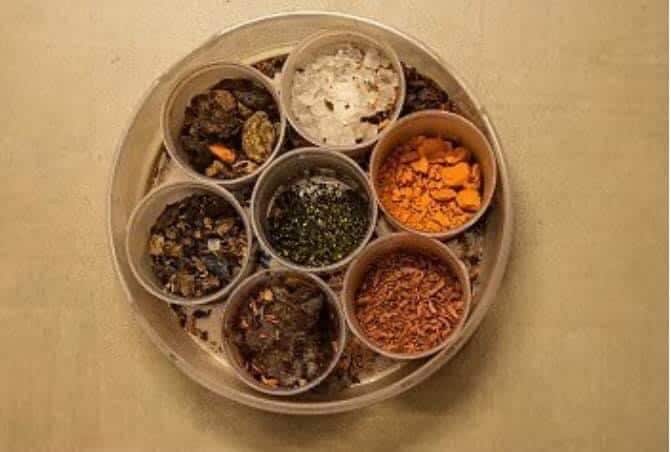 The motifs used in Machilipatnam are close to the original floral sensibilities of the Mughals. I particularly love the Tree of Life. Srikalahasti continues the Hindu tradition of religious iconography.

A genre which has almost disappeared is the Karrupur style, which integrates gold brocade with kalamkari.

The Process of Creation of Indian Kalamkari

The technique of creating a kalamkari is grueling, involving more than 20 washing processes to complete. Briefly:

Kalamkari as Design and Art

Kalamkari has been widely adopted by craft-based Indian designers who have used it in novel ways in collections. The artist Lavanya Mani uses the medium to create wonderful art.