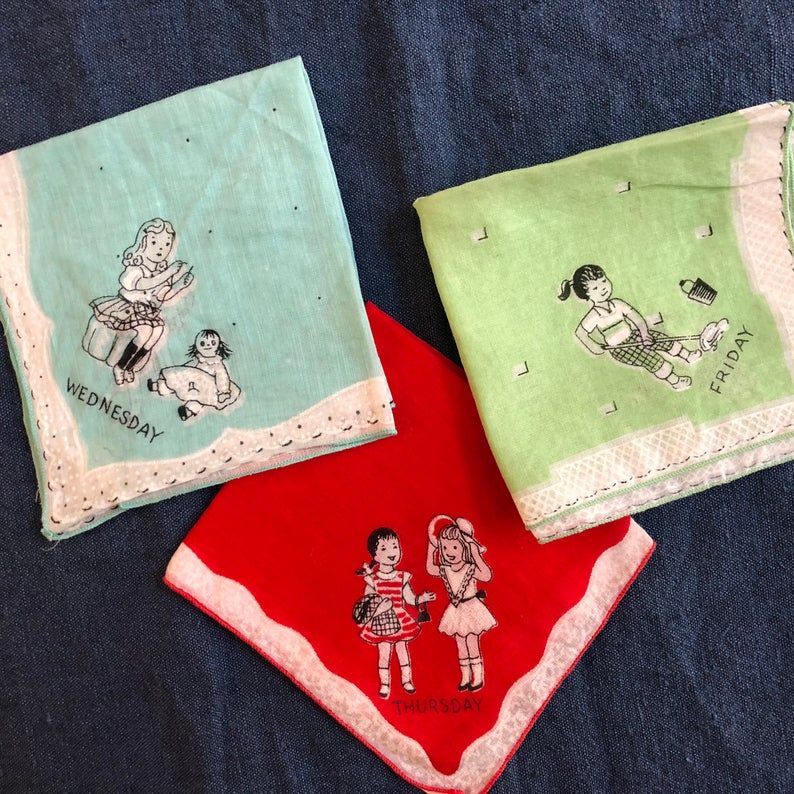 19 Jul The History of a Little Piece of Textile, A Humble Hanky

A Humble Hanky –One of my earliest memories is my mother dabbing her lace-edged hanky with cologne and tucking it into her saree, along with her keys.  To the little me, this seemed the height of femininity and grace.  My mother kept her hankies, like precious keepsakes, in a box with a big bow on it.  A few years later, an aunt gifted me a set of seven, one for each day of the week, embroidered with pixies and flowers.  How delighted I was. 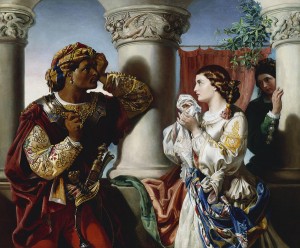 Hankies are not just something we use to sneeze or dab our faces. They have a long history,  intimately connected to the culture and sociology of the era they come from.  They are still given at weddings as a symbol of marital fidelity, so in Othello, the whole plot revolves around one.  They were waved in farewell, used to wipe tears, associated with cowboys, given as keepsakes or as prizes to gladiators.

The hanky first emerged in 2000 BCE Egypt, like white linen cloths, used as a mark of status.  There is mention of them in China, around 1000 BCE, worn as scalp protection. The Romans called them ‘sudariums,’ from the root sudore/to sweat. India has its own history. The telia rumal (hanky) of Andhra Pradesh, used initially to clean temple statues, became a massive export to pilgrims going on Hajj, as did the RMHK, or real madras hanky, which was exported to Africa in huge numbers.

Finally, in 14th century France, they became a fashion accessory, decorated with embroidery and lace. In silk, cotton, and linen, and they continued to be used by nobility, often given as Christmas gifts at the Elizabethan court.

Louis XVI of France dictated their square shape and standard size: 11/11 inches, apparently prompted by his daughter-in-law Marie Antoinette, who adored them.  And so they remain.

With the Industrial Revolution making cloth available cheaply to all classes, all classes widely adopted the hanky. It was helpful and also a quick, cheap way to add color and style to an outfit, worn knotted at the neck or tucked into a bag.  This continued into the 20th century, especially with the growth in urban pollution when hankies could be held to the nose.  As dyes became colorfast and industrial production increased, working-class people would carry a bright hanky as a cheering accessory.

Handkerchief design reflected social movements and trends from the 1930s onwards,  with polka dots, floral patterns, geometrics, calendars, currency exchange rates, housekeeping tips, recipes for food/cocktails.  Any cultural movement inevitably found its way into hanky design. People would pull out interesting hankies as conversation starters, and they became increasingly associated with memorabilia and publicity for businesses.  Many hanky designers became cults and progressed into textile design as a consequence.  The hankies that remain from this era are often signed by the designer.

Sadly, with disposable tissue invention, hankies gradually fell into disuse, were seen more as a cultural and historical relic, and were consigned to drawers instead of the pocket.  This happened in the west from the 50s onwards and in India from the 70s.

Interestingly, the pocket square, a kind of hanky, has become highly popular in the last ten years as an accessory for stylish men tucked into blazer pockets.  There is fascinating textile design around this style statement.

Let’s not lose the hankies that might still occupy the corners of our wardrobe drawers.  They are tiny pieces of cloth, no longer useful.  But they carry a long history, which should not be lost.  The elusive scent on an old one is the best nasal and visual memory.

Let’s not lose the hankies that might still occupy the corners of our wardrobe drawers.  They are tiny pieces of cloth, no longer useful.  But they carry a long history, which should not be lost.  The elusive scent on an old one is the best nasal and visual memory.