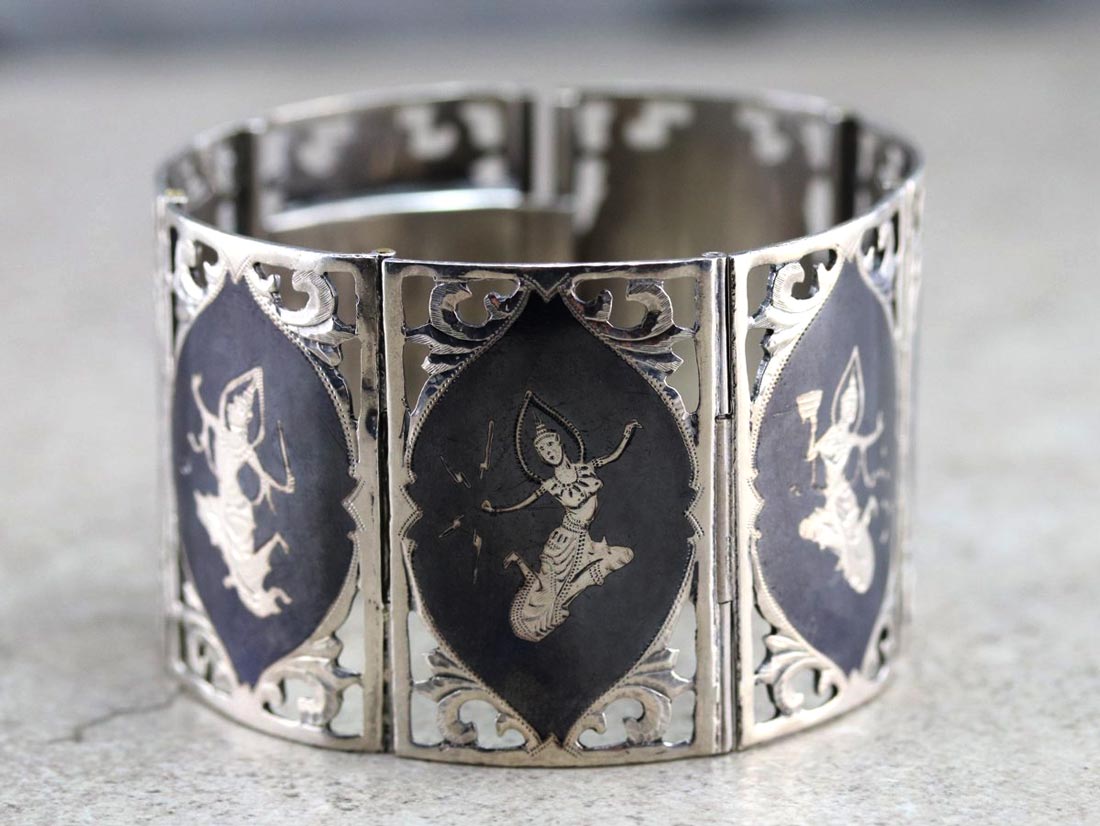 The Art of Jewelry: There is something about jewelry that engages even the most Spartan of women. You can see the sparkle of the stone and the metal reflected in their eyes as they bend over the counter.  Because so much of the history of jewelry is tied up with culture and anthropology, innumerable craft techniques have sprung up around it because it is so desirable.  We’ve examined some in our recent blogs. Today, in the concluding one, we will look at a few more.

RECENT ARTICLES ON THE ART OF JEWELRY

FILIGREE THE LACE IN JEWELRY

THE BEAUTIFUL ART OF ENAMELED JEWELRY

Embossing: The Art of Jewelry

Arguably producing the most exquisite of all jewelry, embossing is the process of creating designs on metal, which could be in relief (repousse) or sunken(chasing). Most objects combine the two techniques. The advantage is that contoured metal is more robust than flat metal, and therefore, thinner precious metal can be used, allowing for the economy.

The tools used are standard for both techniques.  Called punches, they are used to hammer the metal. Usually, the design is outlined both on the surface and reverse of the metal sheet. When beating from the reverse, the design created is in relief, called repousse.  And chasing is the opposite of repousse, using the hammer to depress the metal.

I find it fascinating that embossing has existed as a decorative technique to fashion precious metal from 2500 BCE and continues unchanged in modern times.  There are outstanding examples from antiquity, and the technique continues in use by current designers.

Niello: The Art of Jewelry

Niello as a technique was first used in Egypt. Niello is a black powder, an amalgam of silver, copper, sulfur, and lead.  After designs are engraved on the metal surface, it is covered in Niello, and the whole is heated.  This melts the Niello, covering the engraved channels.  The piece is then finished and polished, removing excess Niello.  The beauty comes from the contrast of black against precious metal, mostly silver.

Niello flourished in the Renaissance, used mainly for religious objects.  Sadly, it has become uncommon in current times, except in places like Thailand and India, where it is used for touristy trinkets.   The Bidri ware of India, though not Niello, depends on its appeal on the same contract between black and precious metal, though reversed.

Cameos: The Art of Jewelry

As a fan of Victorian literature, I personally love cameos, but they have a history beyond the Victorian era. It was practiced by Greece, Rome, and Egypt in ancient times, often with mythological or political themes.  It continued to be popular during the Renaissance, reaching a height during the 19th century.

Cameos are made by the process of bas relief carving on glass, shells, and hard stones like agate or onyx. Usually, one layer of carving is lower than the other, creating a design in two dimensions.  The designs can appear on brooches, rings, and necklaces.

Cameos continue to be popular in contemporary culture, influencing couture and incorporating modern themes in their designs.  The genuinely antique are also highly collectible, appearing in auctions regularly.

Like embossing, the lost wax process of making jewelry goes back 5000 years,  particularly in India.  A mold is created in wax, covered in clay, and sun-dried. It is then heated after making a hole in the clay, through which the hot wax drains out. Molten metal is poured in through the same spot, taking the shape of the original mold.  Once cool, the clay cover is removed, and the metal object polished and finished.

The lost wax technique has been historically practiced in India, Mesopotamia, and Europe until the 18th century.  The famous Dhokra jewelry of E India uses the technique, as do the fine sculptures of the Chola period.

Worldwide, though jewelry sales remain on the up and up, mechanized processes are sadly overtaking the handmade, even in precious pieces.  There is beauty in the imperfection and individuality of handmade.  It is to be hoped that these historical craft forms will not vanish.  Designers will play an important part, as they alone can use craft in contemporary ways that appeal to the urban consumer.