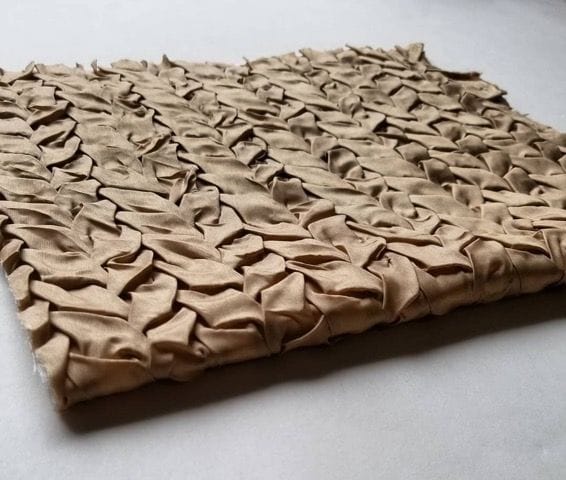 10 Aug Story of Smocking, An Embroidery Technique to Gather Fabric to Create Stretch

Smocking: Those of us who grew up in the 1960s and the decades before then have all worn gingham dresses, very often with smocking. I know that I associate smocking exclusively with dresses for little girls.  But that’s not how the craft started.  In a reversal of timelines from most forms of embroidery, which have been the province of the elite, smocking began as a means to render peasant clothing practical.  And this is what makes it unique among all the forms of embroidery.

The smock was a unisex garment worn in England from the 14th century onwards, and it’s mentioned several times in literature, notably by Shakespeare and Chaucer. Most often, the word referred to the linen shirts worn as undergarments. In medieval England, outerwear was so expensive that it was rarely washed. Linen was a sturdy, washable fabric and was used for undergarments for this reason.

As language evolved and changed, the word came to refer to the cotton/linen blouses worn by the English peasants.  Smocks were cut square and complete at this stage to avoid wasting fabric and using a paper pattern. But because they were worn by the working classes, who needed ease of movement and elasticity, they began incorporating pleating and embroidery over the pleating. The embroidery was done using the strongest glazed thread, mainly at the collar, bust, and wrists, which enabled free movement and protection from the elements by creating air pockets. 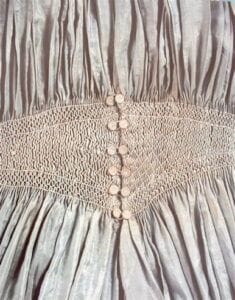 Detail of a dress from this period. V&A

Most peasants owned two smocks, one for daily use and a better one for social occasions.  Interestingly each village developed its embroidery techniques and colors. At this stage, the embroidery over the pleating was called plaiting or biassing.  Eventually, the word smock itself came to refer to the technique.  And so it remains to this day.

During the 18th century and later the coming of the Industrial Revolution,  reaping machines were introduced in the countryside.  The oversized smocks had a way of getting caught in these and gradually became obsolete. In addition, as apparel became cheaper and more readily available, hardwearing smocks were no longer necessary.

As often happens in the twists and turns of fashion,  the Aesthetic Dress movement adopted the smock, making it fashionable for upper-class women and girls, turning the basic silhouette into bishop blouses and dresses.  Fashion was turning against rigid corseting, and the smock was perfect for a fuller silhouette, yet controlled by the smocking. The technique was used to create marvelous decorative elements and silhouettes, particularly by Liberty of London.

In the 20th century, smocking stopped being used for women and was far commoner for children’s clothes, right up to the 1960s. But with the demise of needlework, it became increasingly rarer after this point.   It is now worn by princesses both real and metaphorical, like Princess Charlotte and Suri Cruise when she was a child , and valued by those who look for the historical and high quality.

Smocking is notoriously difficult to learn, and beginners usually work several samplers before they are ready for the real thing. This is because the optimum tightness has to be achieved. 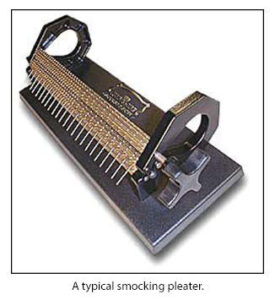 In classic smocking, dots are applied on the reverse, and the fabric is then gathered by hand, following these dots, which are vertical/horizontal, to create regular pleating.  Once this is done, a variety of decorative stitches can be embroidered on the front or reverse.  These can be simple ones like the honeycomb or complex ones like the trellis stitch, bullion stitch, or wave stitch.  Smocking/pleating machines exist to make the job easier, but the best results are still hand done.  The finished product can have amazing textural effects. 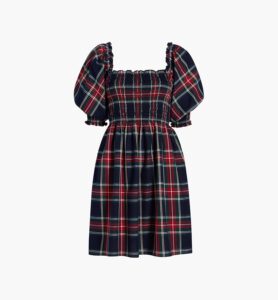 From the 1970s onwards, elasticated smocking has been used extensively for mass-market apparel, but purists thoroughly disapprove.

Classic smocking is so time-consuming that it can no longer be used for everyday apparel,  but it appears in couture, as art,  in interior accents, and occasionally in jewelry.  I love the gorgeous pieces from Tinctory, who smocks in the traditional English way to produce her jewelry.  I also love the work of Jill Flower.