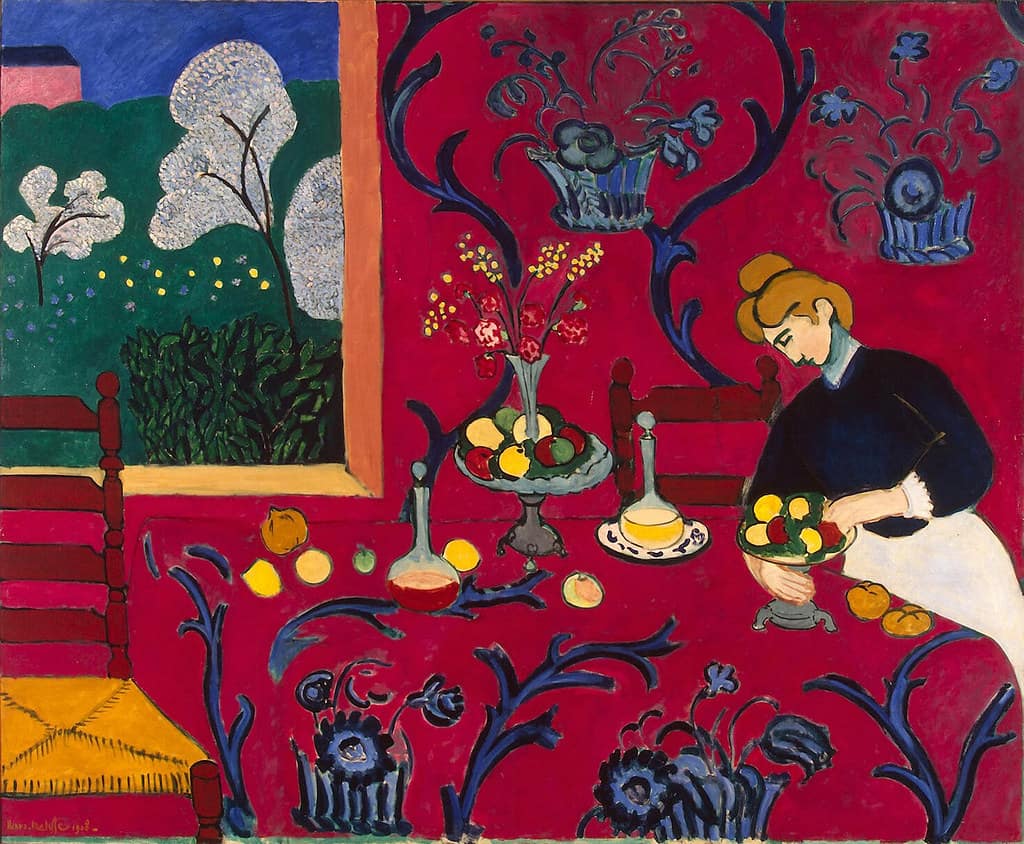 08 Sep Matisse’s Art and Textiles. How Textile Stimulated His Creative Powers To A New Pictorial Reality

With a childhood surrounded by the masters of French textile designers and makers, textiles were the key to Matisse’s imagination. Some of his contemporaries criticized him for using his colors like a weaver. They were baffled to see his love for juxtaposing vivid colors in different combinations as he saturated his canvases in pigments like a dye-merchant.

Read THE HISTORY OF EXTRACTION OF NATURAL DYES-ANIMAL PIGMENTS 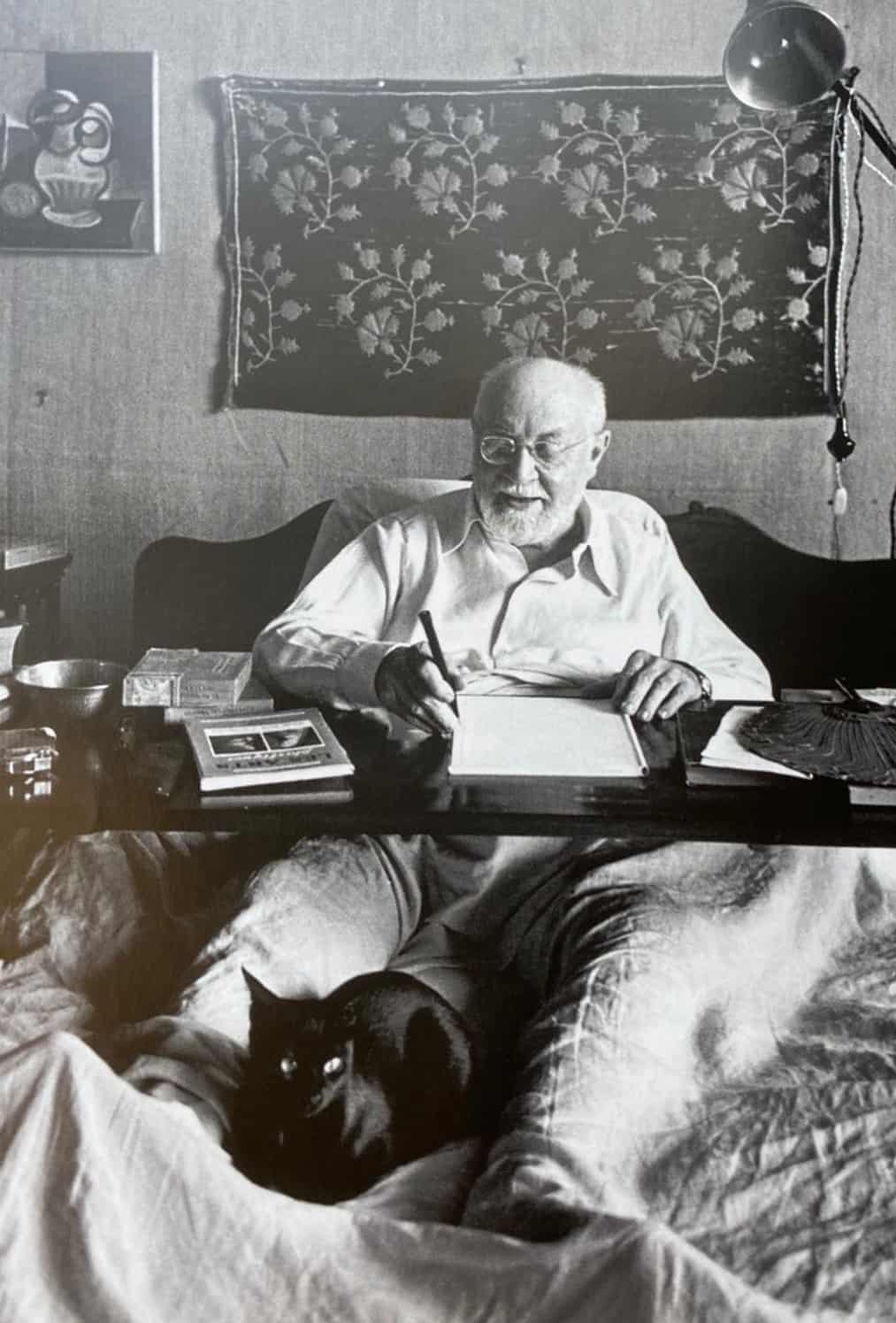 Matisse’s taste in textiles was eclectic. The images of different rooms of his studio and apartment suggest that there were fabrics everywhere- draped over furniture, hanging on the walls, or rigged up in makeshift theatrical sets. French textiles, exotic Persian carpets, delicate Arab embroideries, richly hued African wall hangings. There were curtains, costumes, patterned screens, backcloths, Turkish and Moroccan robes, hats, jackets, and needlework, including Chinese hangings and toile de Jouy. Wherever he went, he took a bolt of scraps of his textiles together with him for painting his art. He fondly called his colorful materials as his ‘working’ library.

Let us look at some of his works and see how textiles inspired these works and vice versa.

The Dessert: Harmony in Red, 1908 by Henri Matisse’s Art and Textiles

Art historians consider this painting as one of the masterpieces of Matisse. The original commission was ‘Harmony in Blue’ by famous Russian collector Sergey Shchukin. However, Matisse, who was making this painting for the dining room in the Moscow mansion of Sergey, painted over the blue with the idea of creating a luxuriant raspberry red fabric that hangs on the wall as a decorative panel with the gorgeous blue motifs inspired from Toile de Jouy motifs.

The red surface looks three dimensional, fulfilling the fabric’s purpose as a painting that decorates the wall and as a covering on the table that holds the vases and fruits—at the same time, the red fabric giving an impression of space so that the maid leaning over the vase could move.

The foliage and patterns on the wall and table extend in the window in the background in a different color tone and proportion, creating a very soothing and coherent impression in mind despite the contrast of the colors used.

During the 1930s, Matisse underwent a vital shift in style as the objects in his paintings became increasingly flattened and removed from real space. They became more sign-like. Les Velours, a sign-like imagination of Matisse,  the entire work uses textile decorations’ structural principles.

This painting with bold colors uses the same Toile de Jouy motifs used in his painting The Dessert: Harmony in Red.

Matisse decorated the walls with motifs representing the piano’s musical notes. He kept the pianist in plain yellow and covered the wall with decorative motifs to give a dimension, voice, and space to the pianist’s music coming out of the piano.

Once when Matisse was in Madrid, he picked up a lovely Spanish wool carpet in blue. He loved that carpet. The blue rug with stylized pomegranate motifs covering the half of the sofa in the painting is the painted version of the rug he picked from Madrid. Other than this carpet. The vivid colors of other textiles used in the painting, like the upholstery on the sofa and cloth on the table, grab the attention.

Odalisque is a word used for a female slave or concubine in a harem, especially one in the seraglio of the Sultan of Turkey. Matisse created a series of Odalisques using different decorative motifs. The vibrant textiles with bold florals motifs played a vital role in his intention to express the extreme sensuality of his Odalisques.

I am sharing images of some of my favorite Odalisques painted by Matisse.

Around the same time, Matisse was making trips to Morrocco and picking up gorgeous clothes and embellishments. Soon he started dressing his Odalisques in see-through pantaloons, silken slashes, and embroidered boleros, as seen below. 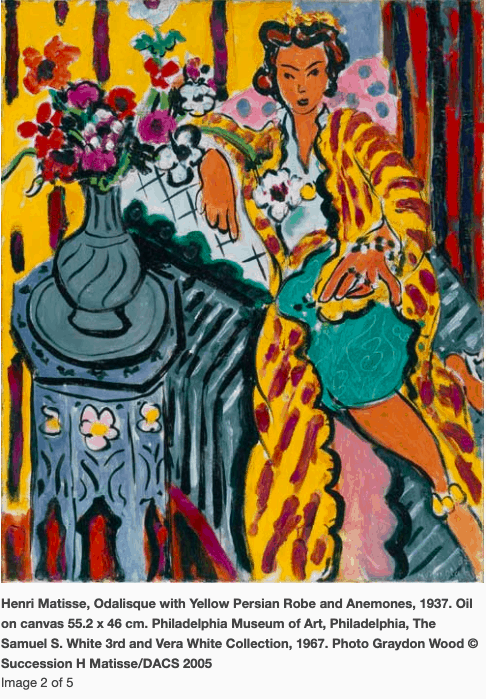 The Color of Ideas: Chausables and African Fabrics: Matisse’s Art and Textiles

His bedroom walls had Polynesian tapas and fragments of Kuba fabrics from Africa hung on them as decorative objects. The material of these fabrics was natural fibers, and repeated geometric patterns covered these fabrics. The beauty of the handmade quality of the fabric appealed to Matisse’s imagination. He thought these handmade fabrics with the inherent imperfections of the human hand were like pieces of art.

These African and Polynesian fabrics begin to lead him towards what he wanted: The decorative impact of the geometric patterns and emotional expression.

Matisse had his studio assistants color the paper. Matisse cut these colored papers to create geometric arts inspired by African and Polynesian fabrics.

Matisse left behind him a lot of textile inspiration for the fashion and home decor fraternity. Gouache cut paper art and the peasant blouse in which he dressed many of his models have been used often by different fashion designers.