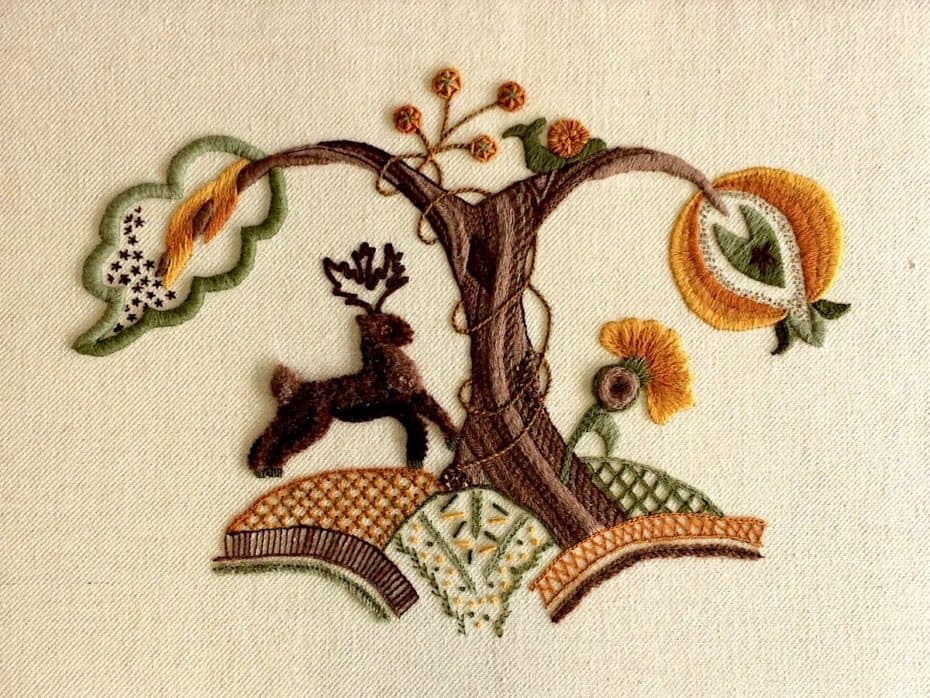 In the 16th and 17th centuries, an awareness began to grow about beauty and comfort, both in interiors and dress. This age coincided with a time in England when huge homes were being built, abbeys were turned into residences, and lasting peace meant that they could give attention to aesthetic

These developments meant an increased demand for textiles like curtains, bed covers, cushions, and apparel. With the formation of East India Company in 1600 and Palampores and chintz imports from India, motifs like the Tree of Life became familiar in England.

Enormous progress was made in dyes at this point in history, giving access to a broader range of bright colors.

Jacobean embroidery, a style based on fanciful motifs 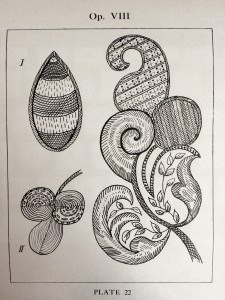 An illustration from the book Jacobean embroidery by Fitzwilliam and Hands

With this background, Jacobean embroidery came into existence and flourished. Jacobean was the Latin name for King James 1, who ruled England and Scotland in the early 17th century and, after whom this embroidery got its name.

Jacobean embroidery is not so much an embroidery technique, but far more a style based on fanciful motifs like plants, vines, animals, birds, and mythical creatures like the unicorn in the folklore of England. And of course, the Tree of Life and other motifs inspired by Indian textiles.

Much of Jacobean embroidery, but not all, is crewelwork, which is raised embroidery in wool, of which the most famous example is the Bayeux Tapestry, which relates the tale of the Norman Conquest through its motifs. The earlier wool embroidery traditions, especially the church’s tradition, heavily influenced the Jacobean Crewel Work. Much Crewelwork of this period uses blues, lovely greens, and pinks and browns as accents.

The other vital technique is stumpwork, which is similar to Crewelwork in being raised and layered but uses a combination of metal and silk threads. Jacobean stumpwork is almost three-dimensional and often incorporates wire, seed pearls, beads, and semi-precious stones for its finished effect.  It uses wire and stitches separately to create forms, which are then affixed to the main fabric with more wires, making the unmatchable raised visual effect.

Jacobean embroidery was used to adorn furnishings and apparel and caskets, embroidered wall hangings, and frames, many of which have survived in a better condition than clothing.

Interestingly, the practice of Jacobean embroidery was by men working in ateliers. Each member of the atelier worked on the work specific to his skill, of course, in keeping with the time’s craft traditions.

The craft was considered important enough to have a society called “Keepers and Wardens of the Art and Mistery of Broderers” who reviewed finished works and destroyed those they believed below par!

The Jacobean style eventually fell out of favor in the reign of Queen Anne, giving way to lighter and more fashionable embroidery. Its legacy lives on in numerous needlework workshops, home embroidery kits, and organizations like the Royal School of Needlework in England.

NATURAL DYES – THE HISTORY OF EXTRACTION OF BEAUTIFUL PLANT PIGMENTS

ANIMAL PIGMENTS – THE HISTORY OF EXTRACTION OF BEAUTIFUL NATURAL PIGMENTS