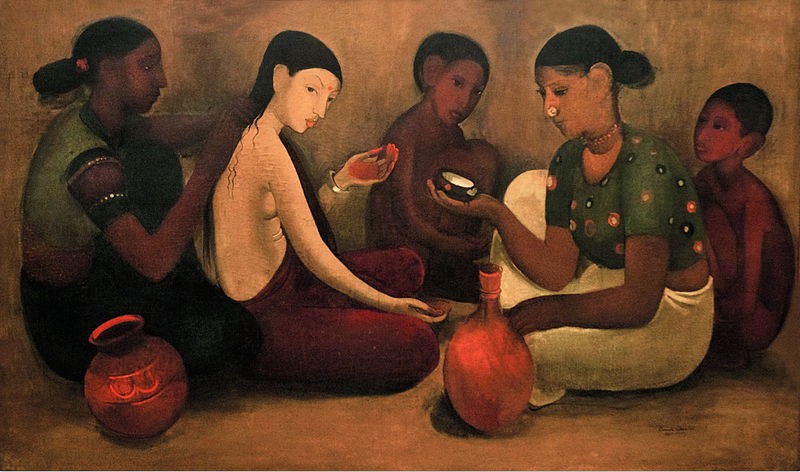 Indo-French Art : The historical connection between India and France goes back to the late 17th and 18th centuries when French ships arrived to set up trading centers in Pondicherry, the then Masulipatnam, and Surat, amongst others. Of course, the French were never as prominent in India as the English, finally losing the race to colonize India after the Battle of Plassey in 1757.  The politics of the time also meant that early European painters in India were all or mostly British, establishing what came to be known as the Company School, a painting style combining English and Indian art styles.  In India, early art schools in the then Bombay and Calcutta were also established by the British and taught art based on European classicism.

Abanindranath Tagore, from the famous family of Calcutta, was the first to encourage art more rooted in India. This development meant that Indian artists were more attracted to Paris rather than London as a center of art, which in any case had been historically an art center, and became a hub of modernism. The French Revolution had made France far more democratic than other European nations, and Paris became the epicenter of culture, literature, and art.  It is noteworthy that France was the center of all art movements:  Impressionism, Art Deco, and Art Nouveau. Several art schools aided these movements. Prominent were the Ecole des Beaux-Arts and the Academie Julian.

Indian art students, starting with Amrita Shergil in 1929, flocked to the Parisian art schools, attracted not just by the teaching, but by the Bohemianism of Paris, with its intellectuality, its cafes, and an atmosphere free of the bleakness and morality of the times.

India in the 50s was struggling as a newly independent nation, and brain drain was a common phenomenon, with achievers taking off to the west for better opportunities. Art was hardly a priority in a country where everything was rationed. No wonder Paris seemed inspirational, in contrast.

Let us look at some of the Prominent Indo-French Artists

Born to a Hungarian mother and an Indian father, Amrita was the very first artist from India to study in Paris at the Ecole des Beaux-Arts, where she excelled. While her early works were rooted in Impressionism, she adopted a more Indian style to return, painting Indian subjects, particularly the dispossessed. In this, her reputation rests, a unique style based on her east-west background.

Mukherjea went to study in Paris in the late 1930s, where he met Matisse, who was to prove a lasting influence, especially his Odalisques. And yet, his style remained rooted in Indian art, mainly the miniatures of Basohli. He, like Shergil combined Indian and western influences to unique effect.

Studying in Paris in the late 40s and early 50s, Sabavala understood the importance of the line, working with free form in his interpretation of Cubism. As he developed as an artist, he evolved his style, painting India and her nature, but still in the Cubist style he understood in France.

Kumar studied in Paris in the early 50s and came to be heavily influenced by the intellectual climate of the day, meeting Sartre and Camus. His abstractionist works most often depict the perils of life in the big city for the middle class, turning in later life to abstract landscapes.

Raza, other than Shergil, is arguably the most famous painter to have studied in France. However, it was not so much the academics as Paris itself that shaped his art, where he spent much time in art galleries, museums, at the opera and theatre.  He stayed on in France until 2010, developing his ultimate style, based on Indian philosophy.

The past and present of the Indo-French Art

Interestingly, though France had no trouble claiming artists of other nations such as Picasso, Van Gogh, and Max Ernst, Indian artists have been mainly ignored in the annals of French art,  other than Raza winning the prestigious Prix de la critique.  There is no real explanation for this, but the fact remains that some of our most outstanding artists honed their skills in France.  Therefore, Indian art, both in their time, and those that came after, has benefitted from this enormously.

In our times, much of the art scene has shifted to New York, yet Paris cannot be replaced, with its long history, culture, and intellectual climate, as the center of the art world.