It was mainly during the reign of Mughal ruler Jahangir, from the 17th century onwards, that the flower and leaf became inextricably linked with Indian textile design.

Emperor Jahangir had a great love of nature. He loved to travel to the beautiful floral gardens of Kashmir in the spring and made his court painter Mansur  (Ustad Mansur was a seventeenth-century Mughal painter and court artist. He grew up during the reign of Jahangir during which period he excelled at depicting plants and animals) paint all the beautiful flowers he saw there.

When the European ships and along with them the European prints and books started making their way to the Mughal court by the early seventeenth century, Emperor Jahangir’s fascination for floral designs reached a new height seen in the textiles developed in the Mughal court during this time.

Jahangir’s son Emperor Shah Jahan, who commissioned the ever so fabulous monument in the world that is Taj Mahal, took his father’s love of florals to greater heights. There were stylized florals on carpets, textiles, metalworks, and of course, the sumptuous floral pietra dura on the Taj Mahal during his rule. These Mughal courts came to be known as a Paradise Garden on earth.

The white floral embroidery with intricate stitches flourished during the Mughal court. There are many miniatures from the time which show Mughal Emperor Jahangir wearing a flowy white muslin garment decorated with fine white embroidery. Jahangir’s consort, Empress Nur Jahan, who had a Persian lineage and a great interest in embroidery is said to have brought the beautiful art of floral white embroidery back to the Mughal courts. She set a trend in the Mughal court by herself embroidering a cap with Indian florals with the application of the finest white thread work. Buti ( paisley) became the most prominent motif of chikankari embroidery and it continues to be such to date.

The floral patterns on the textiles in the seventeenth century were naturalistic. The use of florals was as a whole unit with stems and leaves. It was used either as a repeating unit or was set singly as a niche for wall-hangings and prayer carpets.

Towards the end of the seventeenth century, the flowers became less realistic and more stylized, losing their stems and leaves. They then came from the space of inspired imagination. These stylized floral designs also started appearing in the rural embroidery and prints of textiles from Rajasthan and Gujarat.

Impact of Global Trade on Textiles with Indian Floral

Indian floral designs made their impact beyond their borders once the Indian textiles were imported and used in other countries. For example, India had a long-standing market in South East Asia, mainly in Indonesia, Java, and Thailand. The textiles sent to these countries were a stunning amalgamation of design from the Indian subcontinent and the country to which they were exported.

Similarly, once India’s textiles started going to the European world, the designs were ready to be incorporated into the British and Dutch interiors. In the early days of the textile trade, the English Crewel embroidery served as excellent inspiration for the textiles imported to the West, whether handpainted cotton from the Coromandel coast or embroideries from Gujarat. Later, French woven silks provided a great source of inspiration for the Indian dyed cotton intended for the British and French markets.

HOW DO YOU SOURCE SUSTAINABLE COTTON

KHADI OR KHADDAR- HOW IS KHADI PHILOSOPHY APPLICABLE TODAY

By the nineteenth century, when the industrial revolution in the western world has already led to the demise of the handpainted cotton trade, Cashmere shawls from Kashmir with their beautiful ‘butah’ were still sought after until these shawls were also imitated on the European machines very soon. The buteh made on the machines became more stylized and came to be known as the ‘Paisley’ pattern (It got the name Paisley as it was developed in a Scottish town with that name); eventually, the Indian floral elements became unrecognizable.

THE STORY OF CASHMERE OR KASHMIR SHAWLS 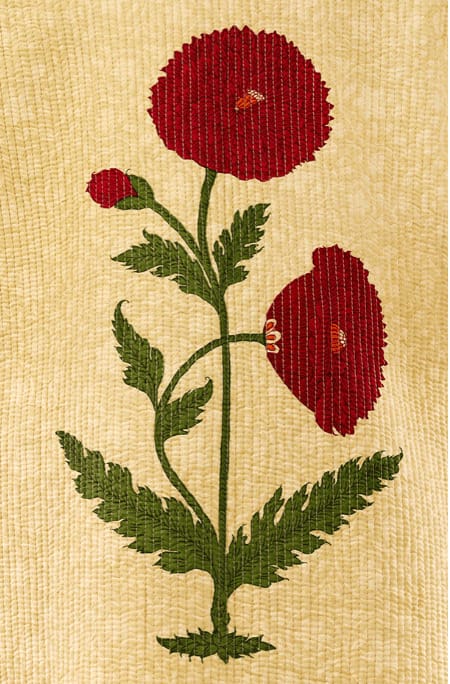 It is great news that the designers worldwide are now going back to cultures and traditions for inspiration from the past few years. The Indian florals in their original or stylized form are starting to make their way back to global textile design.