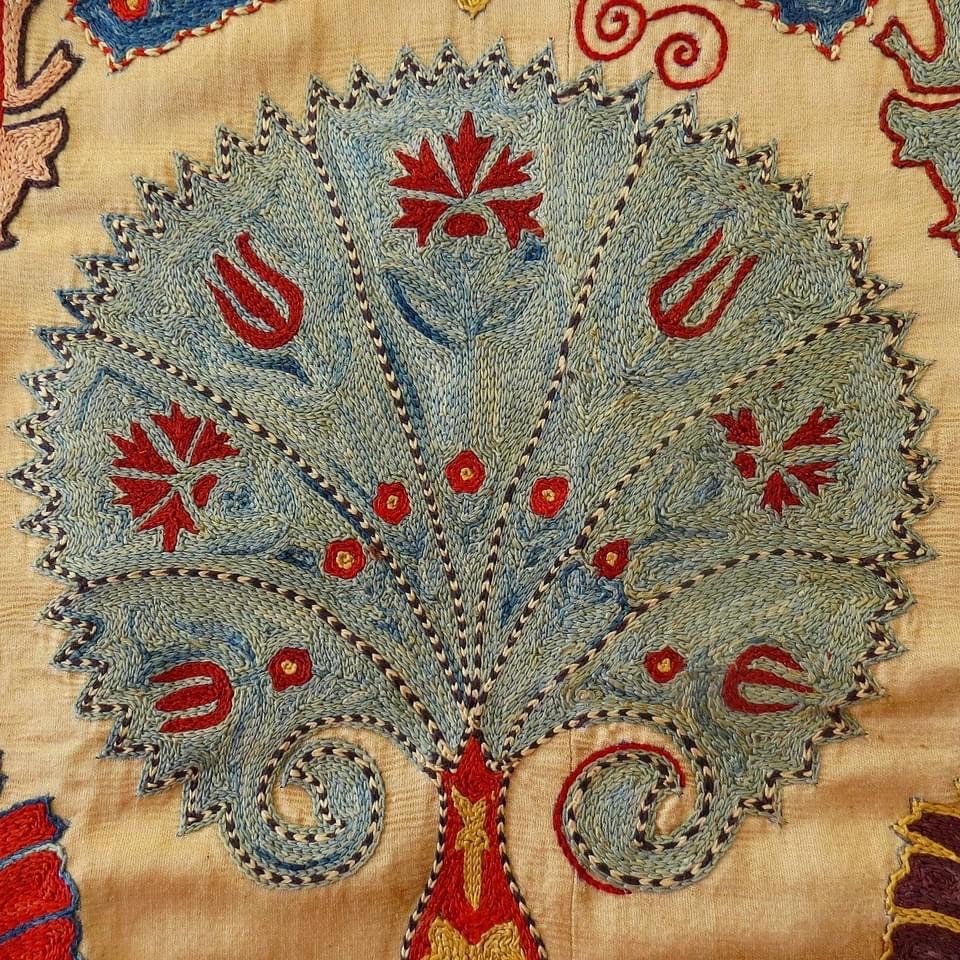 07 Feb Historic Design Motifs, The History, Culture and Anthropology, and Relevance to Craft

Historic Design Motifs: There are recurring motifs in textile, architecture, tombs, and artifacts that we have seen through our lifetimes, and we are so used to them that we pass them by without a thought. Many of these motifs have long and complicated histories spanning time and straddling nations. An understanding of these is to understand culture and anthropology, and it is especially vital to craft.

In earlier blogs, we have discussed the Paisley and the Cypress, arguably two of the most important.  Today, let us look at a few more, perhaps less known but equally historical. The Historic Design Motifs: Cintamani

Buddha holding up the Cintamani

The Cintamani symbol of three circles grouped in a triangle is related to Buddhism and is the most sacred symbol of that religion.  The story goes that the stones are sacred relics found in a chest that dropped from the sky during the reign of King Nyatsen. In time, the three stones came to represent the Buddhist trinity of Buddha, Dharma, and Sangha.  Interestingly, the trope of sacred treasures is found in many religions globally, including Japan and Egypt.  And of course, the concept of the Holy Trinity is present in Semitism and Hinduism.  It extends to other concepts such as father/mother/child, the three stages of life, and electron/proton/neutron. 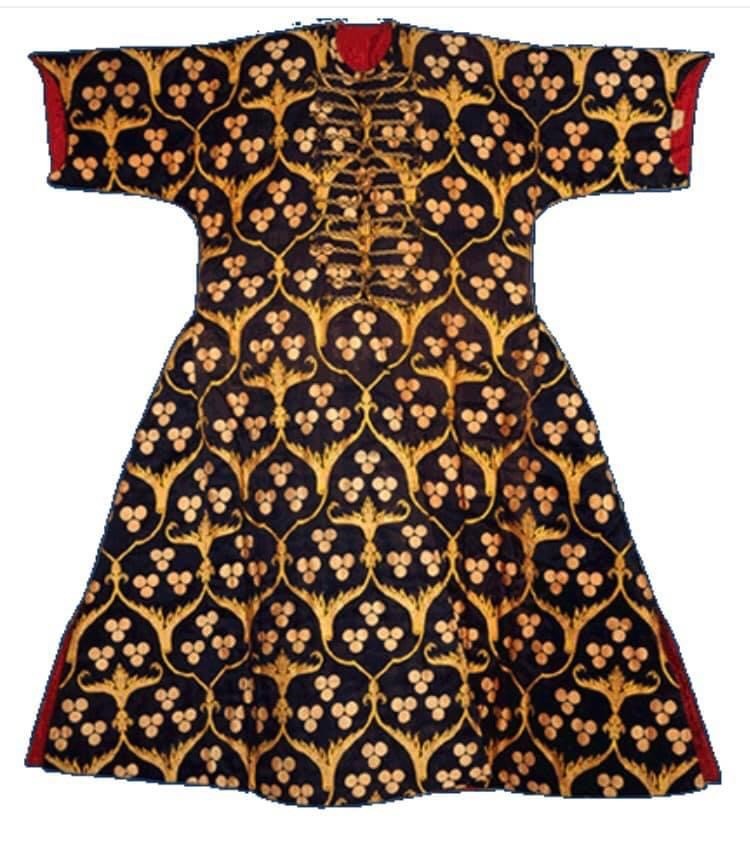 In time, the Cintamani took on myriad meanings, such as a wish-fulfilling gem in Hinduism,  depicted with three balls above wavy lines, something akin to tiger stripes. It began to be associated with royalty and started appearing on textiles in India, supposed to have protective powers for the user.

In our blog on the Silk Route, we have already discussed how ideas traveled from east to west, and the Cintamani was one such. It was adopted widely in Ottoman Turkey, frequently appearing on textiles associated with royalty.  It could emerge as the entire symbol or just three circles, or only the wavy lines.  By the 15th century, it appears to have become the official symbol of the courts, found not only on textiles but on ceramics and tiles.

The Cintamani traveled to Persia too, where it is a common motif in carpets, most often appearing as florals.

Though its deeper meanings are not understood commonly, the motif is found in contemporary design, from ceramics, textiles, apparel to even pie design.

The palmette or arabesque is another motif found most often in Persian rugs, though it frequently appears in all forms of craft and art.  Though it is floral, it is not like any particular flower but is stylized as a combination of floral motifs. 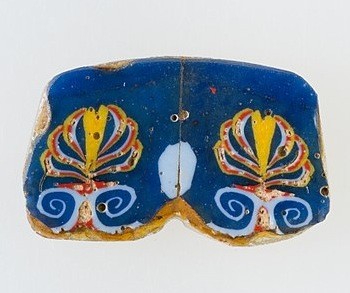 The motif is found initially in ancient Egypt, where it appears on apparel, tiles, art, and the walls of tombs. The Egyptian palmette may be derived from the lotus, which was a flower carrying meaning for the united kingdoms of Egypt. It was associated with the crown of  Ra the Sun God and is depicted as a flower.

Ancient Greece has common examples of the palmette, likely derived because of links between Egypt and Greece. Called Anthemion in Greece, it appears on ceramics and architecture.

Unlike the Cintamani, which traveled from east to west, the palmette traveled in the reverse direction, traveling to Asia, where it became associated with the sacred tree.  Its prominent use is in Persian rugs,  particularly from the 15th century onwards, until it became associated with Safavid rule.  Its associations with the divine and sacred were probably the reason it was adopted.

The palmette continues to be popular, particularly in the interior space of design. 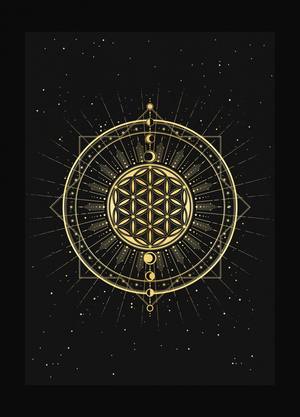 The Flower of Life. From Cocorina.com

Unlike the others, the Flower of Life is a geometric symbol, nineteen overlapping circles evenly spaced. It represents a perfect example of sacred geometry, and therefore philosophically stands for the interconnectedness of all life forms. 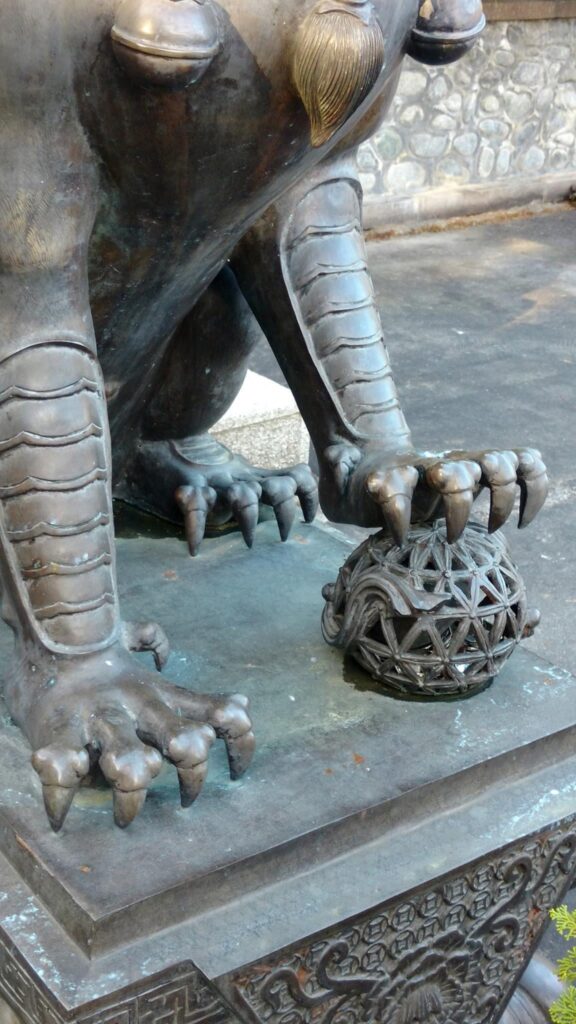 The symbol is found in virtually all cultures, in art, architecture, sculpture, and manuscripts.  It has various meanings, but the central thought seems that the world is a divine plan, following cycles of creation.

The flower of life has been adopted by New Age movements, who use it as a meditative exercise.

There are other motifs, such as the fish and the lotus, subject for a separate post. But one thing is clear.  Humans through history, have sought to impose order on a world they often find frightening and inexplicable, by giving meaning to recurring patterns and motifs.  And these have affected the arts and crafts so much that we are the richer for them.