Zardozi Embroidery: There is something about embroidery that has held the world in thrall in all of recorded history.  Is it the human urge to beautify and improve? Is it a stress buster? Whatever the reasons, India probably stands at the forefront of the world in terms of both the variety and the complexity of its embroidery traditions. Many of the embroideries found on garments on the international catwalks are developed in India, though this may not be known or acknowledged.

KASHIDAKARI – THE GORGEOUS EMBROIDERIES OF KASHMIR

JACOBEAN EMBROIDERY A STYLE BASED ON THE FOLKLORE OF ENGLAND

This is a vast topic, so I am going to examine it in a series of blogs.  Today, let’s look at Zardozi Embroidery.

Originating in Persia, the word reflects its origin: zar means gold in Persian, and dozi means embroidery. Therefore the word means embroidery in gold.  Originally the zardoz crafters used real pearls and precious stones, setting them with real gold and silver thread.  Zardozi flourished under the  Mughals, who were enormous patrons of the arts, though there is enough evidence that it already existed before the Mughals. Scholars opine that the hiranya or cloth of gold mentioned in the Rig Veda is woven zari.  From the paintings of Ajanta to literary sources like the Acaranga Sutra, there are manifold references that advise Jain monks to avoid cloth embroidered in gold.

The expansion of the Silk Road led to a huge demand for this kind of embroidery,  with cross-cultural influences from the Arabic world influencing both genres of embroidery. As Muslim emperors established themselves in India, the craft was given a huge boost, being used on shoes, apparel, riding paraphernalia, and tents. Karkhanas or workshops under royal patronage were set up, especially because of khilat or the practice of the monarch bestowing robes on favored courtiers. 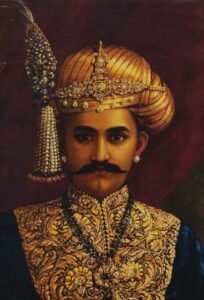 Hindu kingdoms in Andhra Pradesh, Gujarat, and Bihar were quick to follow, adopting the term Zardozi. At this stage, metals used were still precious, and therefore the craft was worn only by royalty and the priestly class, but gradually metals like copper and iron began getting used. Schools of embroidery were set up in Varanasi, Lucknow, Hyderabad, Bhopal, and other places where Zardozi still flourishes.

A popular myth among the Zardoz of Delhi related to the origin of this craft runs as follows:

Once a mosquito found the entrance to a king’s head and gave him a severe headache. All the options to get rid of the mosquito failed. Finally, God himself appeared in Hakim’s ( doctor’s) dream and told him that the resolution lies in hitting the king with a shoe in the area of the pain. The Hakim communicated the dream. A shoe embroidered with gold and silver threads was ordered for this purpose. The shoe helped kill the mosquito and freed the king of his ailment. The king admired the details on the shoe and patronized the crafters- the Zardoz. 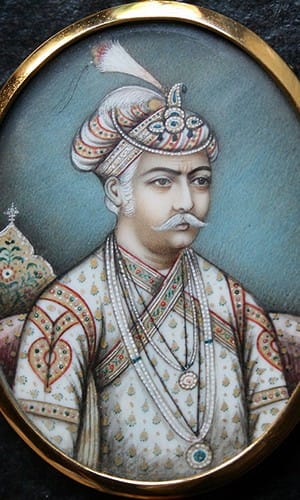 Zardozi was adopted enthusiastically by the western world: the most famous example being the peacock dress worn by Lady Curzon at the Delhi Durbar in 1903, also featuring beetle wings.

The technique of Zardozi remains unchanged in current times, though copper and silk have taken the place of precious metals and imitation stones and beads of precious stones. Traditionally pure Gold was used for making textiles As Gold, a rare material with excellent ductility and malleability formed a perfect element to be drawn into thin wires to create opulent and valuable fabrics. These gold wires, also known as Kasab or zari, were used for weaving clothes. Due to its delicate nature, zari was not ideal for embroidering the surface of the cloth; therefore, these gold wires were further transformed into a variety of coiled materials for embroidery and the technique of zardozi embroidery was invented.

The technique of zardozi embroidery is indicative of metallic applique work than that of embroidery. The metallic threads of varying shapes, along with stones, beads, etc., are laid on the surface of the fabric covering the tracings of the design. The use of the thread is to tack all the materials to the surface of the fabric with the help of a needle. The needle moves upward from the downside. The metallic pieces are laid so close to each other that they appear to be continuous threads even to the trained eyes. The above technique is known as karchobi.

Zardozi embroidery begins by tracing the design on a stencil by poking it with a needle to outline the pattern.  The fabric is placed tightly on a wooden frame called a Karchob or adda to ensure it does not move. The stencil is placed on the fabric, and a powder is rubbed on it, transferring the design onto the fabric. The craftsmen sit cross-legged around the adda to embroider the fabric. The kamdani technique is done on the traditional handheld embroidery frame.

Motifs remain Indian in inspiration. The designs have been influenced from time to time based on cultural influences. They range from floral to geometrical to animal and bird motifs. The designs are border designs, central designs ( thali-numa), geometrical patterns (jalinuma), filler designs (Bharat), motifs (buti, buta) etc. 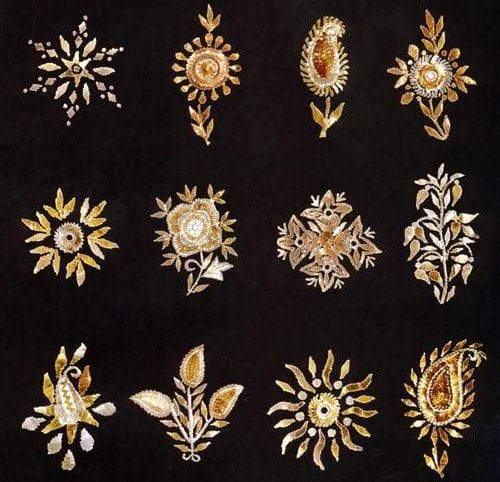 Having said that,  there are always exceptions like the work done by Chennai-based Vastrakala, started by Jean Francois Lesage from the eponymous Paris house of embroidery.  Vastrakala has used the zardozi tradition to recreate Napoleon’s throne, complete with oak leaves and laurels. They have reinvented the Hyderabad Nizam’s bed for the Park hotel in Hyderabad.  Initiatives like these are welcome and infuse novelty into craft traditions.

Zardozi entered a period of decline post-Mughal ruler Aurangzeb, but fortunately has made a huge revival in recent years, through the efforts of designers such as Ritu Kumar, who has written a seminal work on the subject “Costumes and Textiles of Royal India.”. It is widely popular as couture wear for weddings and appears on brocades, velvets, and silk, both for apparel and accessories, as well as interiors.  Not all work is of the highest quality, but that’s a small price to pay to continue this great craft.  Designers such as Rohit Bal have used the craft in novel and humorous ways, all good developments.