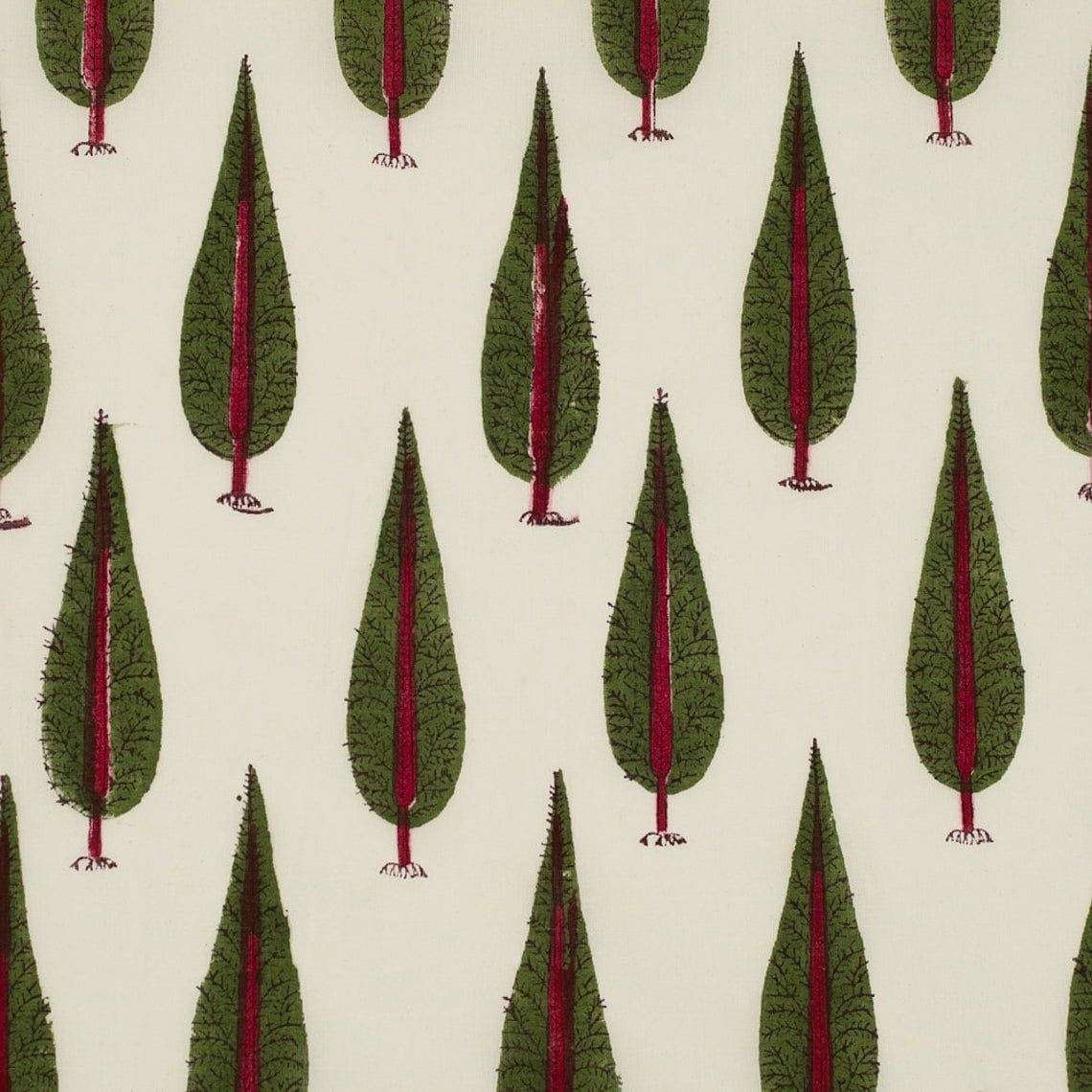 Cypress Motif: When studying the history of motifs in the arts and crafts, we often read about the Paisley.  But there is another motif, more mysterious, more philosophical, one that represents death and eternal life. And that is the Cypress.  Many say that the Paisley was born of the cypress when a stray songbird sat on its very tip, bending it slightly.  But let’s go back to the beginning. 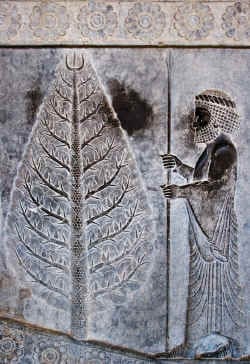 The Sassanian dynasty ruled modern-day Iran around 225 CE, with strong Greek, Roman, and Zoroastrian influences.  Zoroastrian worship mainly consisted of worship of an urn of fire, surrounded by two immensely tall cypress trees. As the religion developed, cypress branches were incorporated into the fire ceremonies, often burned in the urn.  Cypresses were planted around temples and graves; in fact, the oldest cypress is 4000 years old, the Cypress of Kashmar on the Uber Mountain in Iran.

The Zoroastrians believed that trees represented immortality, and in fact, their word for tree and immortality was the same.  The cypress, long-lived, evergreen, and reaching far into the sky, became the potent symbol of immortality and the ever after in Zoroastrian philosophy.

With the passage of history, Persian culture changed from Zoroastrianism to Islam, but the old culture remained in pockets. The tree motif was incorporated into Persian culture, appearing in carpets, pottery, art, tiles, and gardens.  The Mughals looked to Persia as their role model for culture, art, and craft, so with them, the tree made its way into India. 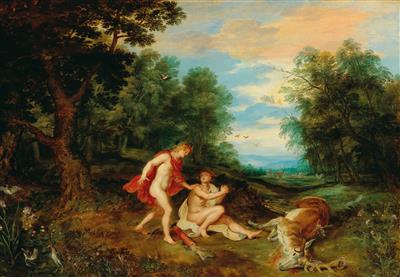 In Greek tradition, the cypress was associated with mourning and was often planted in graveyards, along with the willow.  It was used to make wreaths arranged in mourning households and decorate Pluto, the god of the underworld. The Greek tradition has several myths associated with the cypress, the most prominent concerning the youth Cyparissus, who was transformed into the tree after killing a tame stag. 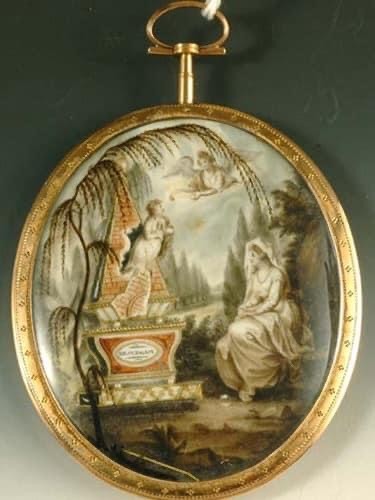 The Classical Greek tradition spread to the rest of Europe. There are numerous mourning pieces of jewelry extant, showing the cypress in the background. 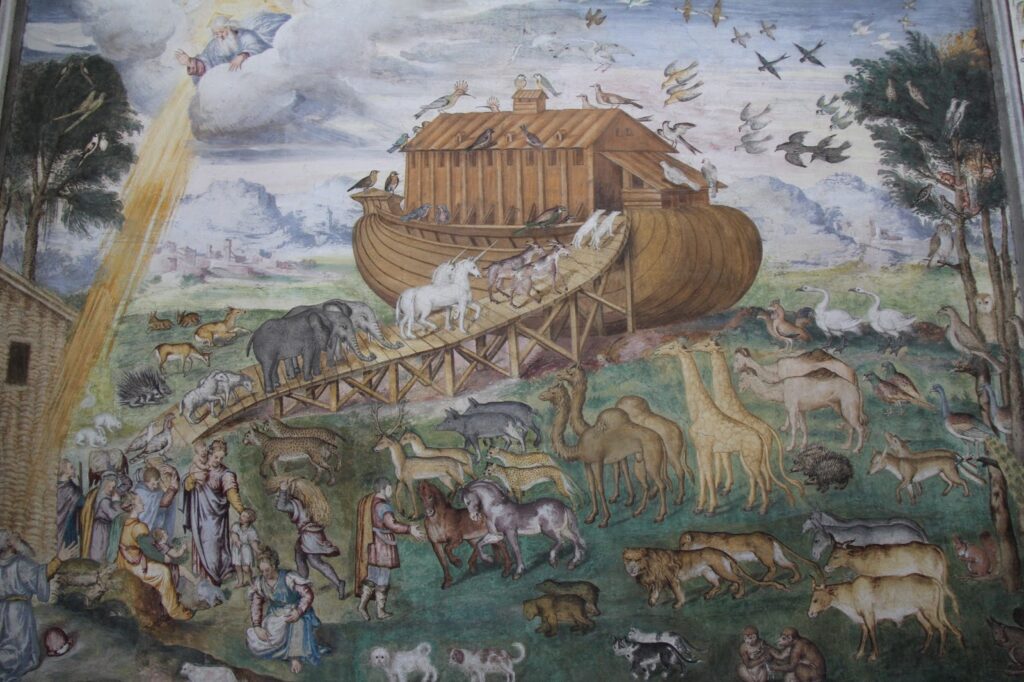 Noah’s Ark was supposed to be built of cypress wood, and the tree continues to be planted in Jewish cemeteries.

Let us look briefly at the use of the motif in the crafts.

When the cypress motif appears on Persian carpets, it is a pointer that Zoroastrianism continued in Persia, covert or otherwise.  When used in carpets, the motif is magnificent, often spanning the entire length, tall, soaring, and majestic.  It usually appears alongside the Tree of Life, symbolizing the same themes: eternal life.

The cypress motif appears commonly in Mughal architecture, with the most famous being the Itimad ud Daula of Agra, built by Nur Jahan for her father.  The other is the stunning Cypress Tomb in Lahore, built in the 18th century.

The motif appears famously in the tiles at the Topkapi palace in Turkey and is otherwise a common symbol in Iznik tiles.

The Mughals used floral imagery extensively in their textiles, including the cypress.  Interestingly the French designer Brigitte Singh discovered ancient records of these motifs in her father-in-law’s archives.  Her use of the cypress is the most artistic and aesthetic of the motif in the current design, in my opinion.  The motif appears regularly on apparel and home, on many products designed in India.

The stately cypress is often found in gardens, most famously in Provence, and on the road leading into Srinagar in Kashmir.  There is a famous painting by Vincent Van Gogh incorporating the tree, painted in his wandering as through Provence. 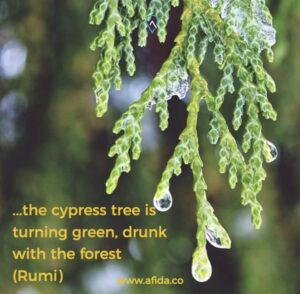 The cypress frequently appears in Islamic poetry as a symbol of righteousness and truth.  Here are some beautiful lines from Rumi:

I am the tall cypress, which I can show you a sign of straightness. There is no sign of more straightness, other than the cypress.

There are dozens of miniatures in the Persian and Mughal traditions, where the cypress appears in the foreground and background.

In current times, the cypress’s mystic associations are lost, and in most cases, it serves a decorative purpose.  But it continues to remind us, in the arts and crafts and geography, of its sacred and religious origins.

THE FASCINATING TEXTILE CRAFTS OF JAPAN

PUNK: CHAOS TO COUTURE. CULTURE VS ANTICULTURE IN ARTS & CRAFTS

JACOBEAN EMBROIDERY A STYLE BASED ON THE FOLKLORE OF ENGLAND

THE FASCINATING TEXTILE CRAFTS OF JAPAN