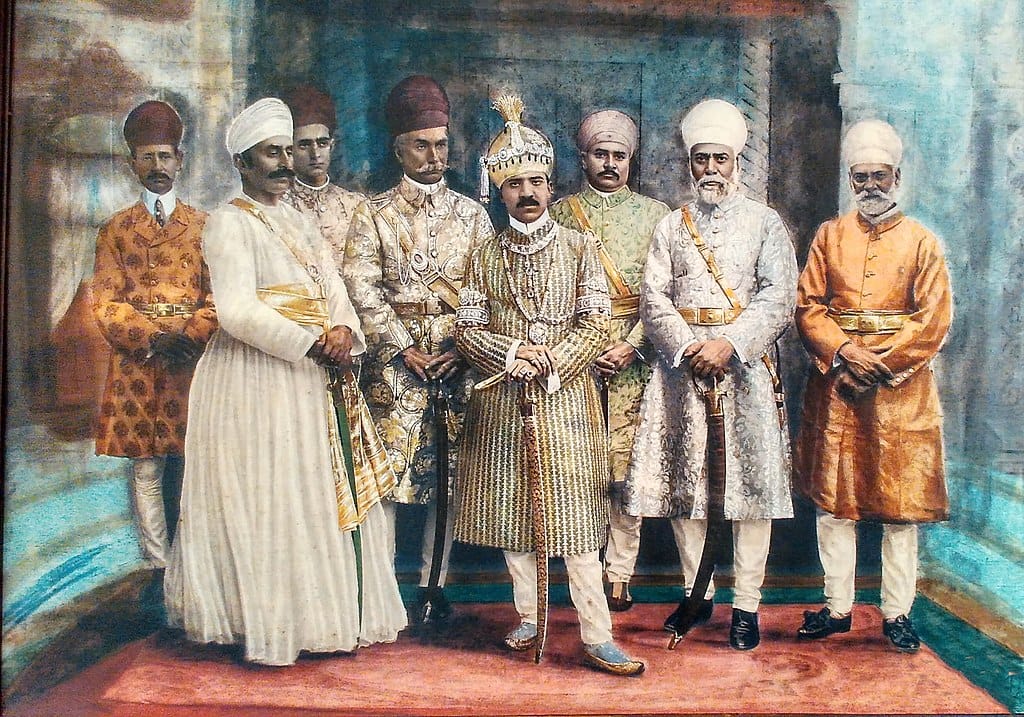 The Nizam of Hyderabad with his Court, in Sherwanis, Jama, and Achkans.

22 May Achkan, Shervani and Choga – The Indian Silhouettes

Achkan, Shervani and Choga: In our last blog, we spoke of the history of the Angrakha and the Jama.  Today, we will continue with three other classic silhouettes worn by men in India, two of which are still worn on formal occasions.  The Achkan is so popular that an Indian wedding is unthinkable without the groom and several guests wearing it.  I remember when my sister was married, I cut up one of my Benares brocade sarees to make a miniature version of Achkan for my then seven-year-old son, something I now regret considering he wore it just once.

The Achkan :Achkan, Shervani and Choga- The Indian Silhouettes 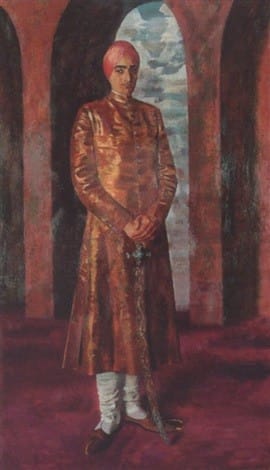 We described in our last blog how the Angrakha dominated style in much of India, right up to the 19th century, and in a sense, it was the mother of the two silhouettes that followed, especially the Achkan. The very word Achkan is a derivation of the word Angrakha. With the advent of British rule, India was exposed to a slew of tailoring techniques and European style. Around this time, the camera had begun to gain ground over paintings. It was far more accessible for the average person to get a portrait of themselves, all tricked out in their tailored clothes and matching accessories.  As tailoring became popular, the Angrakha, combined with western styling, evolved into the Achkan. The lower part became narrower, the seam at the waist disappeared. The silhouette was straight and open all the way. Early Achkans were often fastened at the side like the Angrakha, but gradually, band collars and buttons were added.

THE JAMA AND ANGRAKHA, THE SILHOUETTES OF INDIAN APPAREL

Interestingly, an extended panel could be fastened inside so that the garment did not gape open. The Achkan was worn like the Angrakha, with a patka or a waistband, often works of art in themselves.  Lowers could be churidars or pajamas.

As it evolved, the Achkan could be made of wool, brocade, or velvet, featuring embroideries like badla or zardozi.  The Lucknow version in muslin with Chikankari, meant for light summer wear, was particularly attractive.

The Achkan in current times is widely available for formal and festive occasions, even sported by women on occasion. One could argue that embellishment like Swarovski crystals and beads may not be appropriate for this historic silhouette, but that’s a matter of personal taste.

The Sherwani : Achkan, Shervani and Choga- The Indian Silhouettes

A silhouette similar to the sherwani has been worn for millennia in Central Asia, Hungary, and Persia.  The name may be adopted from Sherwan, in present-day Azerbaijan, where a very similar folk dress was worn. In India, though, it evolved, like the Achkan, from the Angrakha.  As mentioned above, the 19th century saw British influence on Indian tailoring styles, particularly the frock coat worn by the English military and officials of the East India Company.

Gradually, the Angrakha evolved, in combination with the frock coat, into the sherwani. Sherwanis were longer than the Achkan, often had four pockets and mostly seven buttons. The sleeves were very similar to the English coat, as was the lower part.   They were lined, unlike the Achkan, which made them suitable for winter wear.  They could be worn with pajamas or churidars and could be in silk, brocade, himroo,  wool, cotton, and khadi.  The ones for festive wear were embellished in a variety of ways.

Interestingly, the sherwani was popular in the Deccan and the Achkan in North India.  Dr. Toolika Gupta, in her Ph.D. thesis, opines that the sixth Nizam Mahbub Ali Khan was the first to sport the sherwani in 1893, as distinct from the Achkan.

As the freedom struggle intensified in the 20th century, the sherwani was adopted widely by patriots rejecting western apparel. It became virtually a uniform for the freedom fighters of the time.  Naturally, the sherwanis of this time were free of embellishment and were often in solid colors and khadi.

Sherwanis continue to be popular with Indian fashion designers and are often seen in popular culture, particularly Bollywood.  Like the Achkan, much experimentation has happened in fabric, color, and embellishment, not all with happy results.  The experiments have even extended to wearing it with lowers like lungis and Patiala salwars.  But then fashion is about change and adaptation.

Of Turkish origin, the Choga is a long-sleeved outer garment, open in the front, fastened with cloth-cased buttons and loops. It is, in my opinion, the most graceful of Indian silhouettes, stately and dignified.

Since it was an outer garment, worn over the Angrakha or Sherwani, it was frequently made in opulent textiles like pashmina or brocades, mostly highly embellished with trims and embroidery. The embroidery appeared as long borders and sprays on the front and back and on sleeve edges, a legacy of its Central Asian origins, the belief that embroidery served as a protective device.

Sadly, the Choga hardly appears in contemporary fashion, other than niche design meant for a narrow audience, like Satyam in Jaipur. I had one tailored for myself, and it is always appreciated when I wear it.  Surprisingly, it is not adopted by designers.